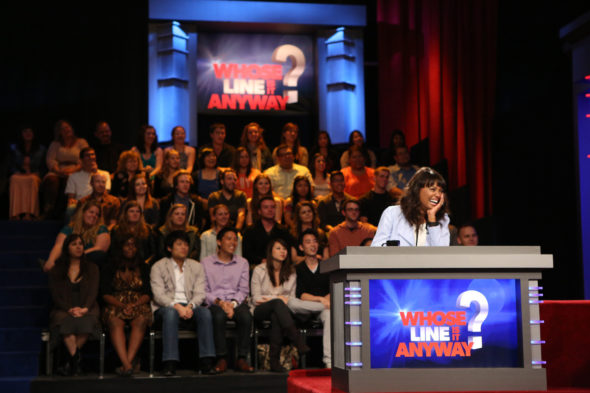 The performers continue to come up with crazy ideas in the 19th season of the Whose Line Is It Anyway? TV show on The CW. As we all know, Nielsen ratings typically play a big role in determining whether a TV show like Whose Line is cancelled or renewed for season 20. Unfortunately, most of us do not live in Nielsen households. Because many viewers feel frustrated when their viewing habits and opinions aren’t considered, we invite you to rate all of the 19th season episodes of Whose Line Is It Anyway? here.

A CW comedy improv series, the Whose Line Is It Anyway? TV show is hosted by Aisha Tyler. Each episode typically features show veterans Ryan Stiles, Wayne Brady, Colin Mochrie, as well as a guest performer. The foursome tests their comedic reflexes by participating in a series of spontaneous improv games. After each round, Tyler doles out points to the performers and she then declares a winner at the end of every episode (not that the points matter). Guests in season 19 (the 11th on The CW) include Jonathan Magnum, Padma Lakshmi, Darren Criss, and Gary Anthony Williams.

What do you think? Which season 19 episodes of the Whose Line Is It Anyway? TV series do you rate as wonderful, terrible, or somewhere between? Do you think that Whose Line should be cancelled or renewed for a 20th season on The CW?