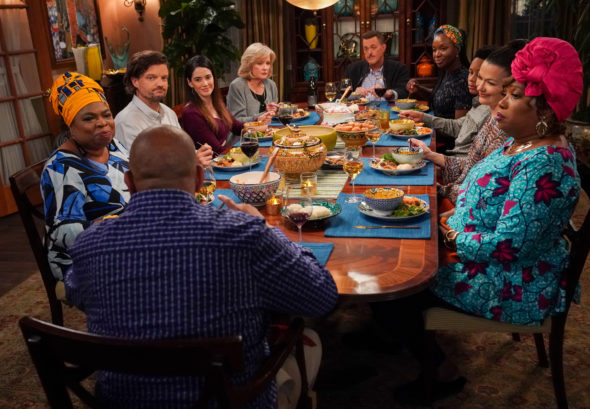 This couple has complicated lives. Has the Bob ♥ Abishola TV show been cancelled or renewed for a fifth season on CBS? The television vulture is watching all the latest cancellation and renewal news, so this page is the place to track the status of Bob ♥ Abishola, season five. Bookmark it, or subscribe for the latest updates. Remember, the television vulture is watching your shows. Are you?

Airing on the CBS television network, Bob ♥ Abishola (read as “Bob Hearts Abishola”) stars Billy Gardell, Folake Olowofoyeku, Christine Ebersole, Matt Jones, Maribeth Monroe, Vernee Watson, Shola Adewusi, Barry Shabaka Henley, Travis Wolfe Jr, Gina Yashere, Bayo Akinfemi, Anthony Okungbowa, and Saidah Arrika Ekulona. As the story begins, Bob (Gardell) is the owner of a very successful compression sock factory in Detroit and runs the business with his mother (Ebersole), his sister (Monroe), and his younger brother (Jones). The stress of the job lands Bob in the hospital with a heart attack and he falls in love with his cardiac nurse, Abishola (Olowofoyeku), an immigrant from Nigeria. She came to America with her young son (Wolf Jr.) and they live with her Auntie Olu (Adewusi) and Uncle Tunde (Henley). Despite their very different backgrounds and her initial lack of interest, Bob is determined to win Abishola’s heart. He eventually does but life has a way of getting complicated.

The fourth season of Bob ♥ Abishola averages a 0.41 rating in the 18-49 demographic and 4.59 million viewers in the live+same day ratings (including DVR playback through 3:00 AM). Compared to season three, that’s down by 21% in the demo and down by 14% in viewership. While these numbers don’t include further delayed or streaming viewing, they are a very good indicator of how a show is performing, especially when compared to others on the same channel. There can be other economic factors involved in a show’s fate, but typically the higher-rated series are renewed and the lower-rated ones are cancelled. Find out how Bob ♥ Abishola stacks up against other CBS TV shows.

Will CBS cancel or renew Bob ♥ Abishola for season five? While it’s not as popular as the network’s other comedies, this show has been a consistent performer. The series isn’t produced by CBS, so the network’s profits are limited, but it is produced by Chuck Lorre, and I suspect the network wants to stay in business with him. I think season five is a safe bet. I’ll update this page with breaking developments. Subscribe for free alerts on Bob ♥ Abishola cancellation or renewal news.

What do you think? Do you hope that the Bob ♥ Abishola TV show will be renewed for a fifth season? How would you feel if CBS cancelled this TV series, instead?