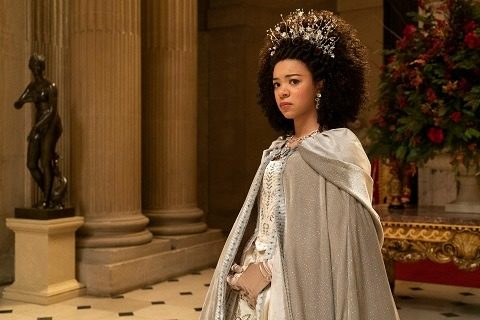 The Bridgerton prequel series finally has a title – Queen Charlotte: A Bridgerton Story. The upcoming prequel will focus on Queen Charlotte’s rise to prominence and power. A sneak peek and the first photo (above) from the series have been released.

Netflix and Shondaland today revealed the first look photo and official title for Shonda Rhimes’ Queen Charlotte: A Bridgerton Story – the upcoming limited series, a Bridgerton-verse prequel centered on Queen Charlotte’s rise to prominence and power. The news was revealed in a preview clip from tomorrow’s Tudum fan event where the series will be featured and more surprises are in store.

Logline: Centered on Queen Charlotte’s rise to prominence and power, this Bridgerton-verse prequel tells the story of how the young Queen’s marriage to King George sparked both a great love story and a societal shift, creating the world of the Ton inherited by the characters in Bridgerton.

A premiere date has yet to be announced for Queen Charlotte: A Bridgerton Story.

What do you think? Do you enjoy the Bridgerton series on netflix? Are you planning to check out this new prequel series once it arrives?

Not going to watch an alternate version of any historical person. Not interested.