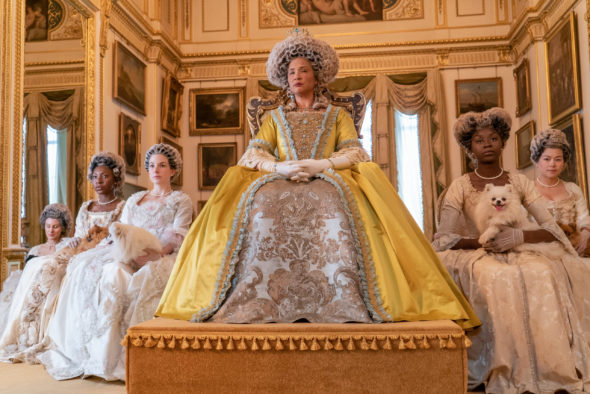 Bridgerton fans have more news about the upcoming and as-yet-untitled Queen Charlotte spin-off series. Connie Jenkins-Greig has been cast as young Violet Ledger, the daughter of Vivian and Lord Ledger (Katie Brayben and Keir Charles) in the series. She’s described as a kind and inquisitive teenager who has not yet entered the marriage mart … or famously become a Bridgerton.

The Bridgerton spin-off is expected to dramatize the rise of Queen Charlotte who is played by Golda Rosheuvel (above) in the Netflix series. The character is not in Julia Quinn’s novels but became a favorite in the Bridgerton TV series produced by Shonda Rhimes. It was ordered to series in May 2021.

Golda Rosheuvel will play the young Queen Charlotte while Corey Mylchreest will star as a young King George.

A 2023 premiere date and more details about the spin-off series will be announced at a later date. The Bridgerton series has already been renewed for the third and fourth seasons.

What do you think? Are you excited to see this addition to the Bridgerton franchise on Netflix?

Nobody wants to cancel this supernatural show?! It is not reality.

The fairytale with no ties to reality continues.