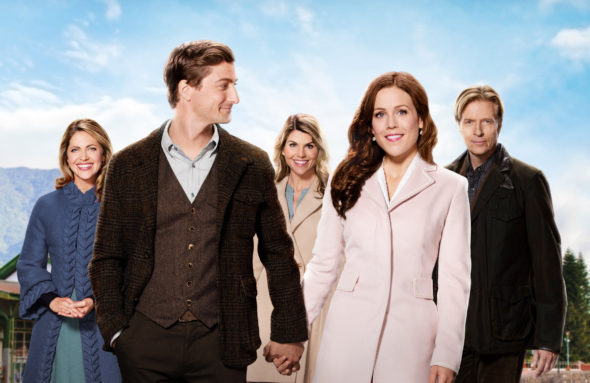 Season four of When Calls the Heart airs its finale tonight — Sunday, April 23rd. But should there be a fifth season? What do you think? Should Hallmark Channel cancel or renew the TV series?

It seems like a fifth season renewal should be a slam dunk but there’s been no announcement yet. Once again, the “Hearties”  are having to be patient.

Are you a fan of When Calls the Heart? Should Hallmark Channel renew this TV series for a fifth season? Would you watch? Take our poll and tell us what you think.

4/24 update: When Calls the Heart has been renewed for a fifth season. Details here.

Definitely have a fifth season. I wish it was on for a longer season. There is nothing else like it on TV from what I can see. I look forward to it all year. Please renew!!!

Of course it should be renewed! If ratings aren’t in the tank, why would it not? Don’t be like WGN America and lose most of your viewers!

Yes, this show definitely should be renewed. Gotta keep the #Heartie love alive for season five. Awesome show and actors.

Definitely renew and make the season longer!! Great show! So few shows that you can watch with the whole family. When we watch it we wished we lived there!

I have watched this show from the beginning I love this show so very much its so great. Hallmark please please renew this show and have Jack come back I really miss him. I love all the actors on this show, so please Hallmark keep renewing this show. Thank you.

Yes, When Calls the Heart should definitely be renewed! This is a show that beautifully portrays a time period that most television channels have. Plus, the scenes are so beautiful- they are breath-taking! Plus this show is unique in that every season gets better and better! Please renew for Season 5!

Yes, please renew. This is a great family show, with good morals. The story line is great writing and gives hope. It shows how you work together as a family, a town to help each other in the good times and in the bad times. Thank you
Patty

Please bring Daniel Lissing back as Jack – or cancel. All good actors, but Jack and Elizabeth are the show.

Love this show – we do not watch TV – but we make sure we do not miss an episode of this. Great story and great quality entertainment. We look forward to Season Five. Bring Jack back!

It’s an amazing loving show. With pure heart I wish all the world can be like this show.
They need to keep it going it nurtured our soul and we need this in the times we live in.
Thank you

It took so long for the two of them to get together. Totally enjoy the show. Only wish each season was longer…

Definitely needs to renew for season 5! Sunday nights will not be the same since season 4 is over.

I love this show, please renew it!

PLEASE DON’T CANCEL WHEN CALLS THE HEART. THERE AREN’T MANY DECENT SHOWS LEFT OF TV ANYMORE AND THIS ONE ANYONE CAN WATCH. PLEASE DON’T LET JACK LEAVE THE SHOW. HIS AND ELIZABETH’S LOVE MAKES THE SHOW AND LETS PEOPLE KNOW WHAT IT’S LIKE TO HAVE A LOVE LIKE THEIRS. I LOVE WATCHING THE HALLMARK CHANNEL BECAUSE IT IS A DECENT CHANNEL. SO PLEASE KEEP THIS SHOW ON THE AIR. MAY GOD BLESS YOU.