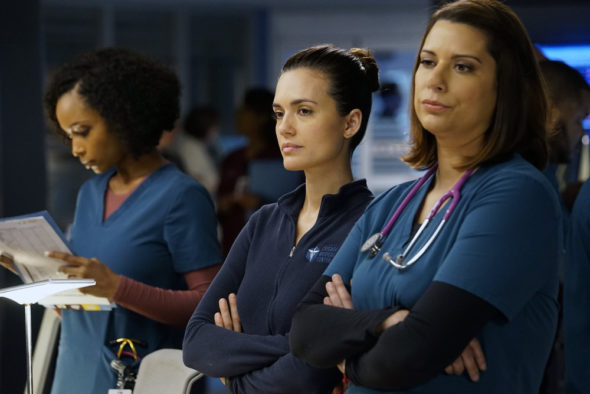 The Chicago Med cast and crew are taking an unscheduled break in their production. A positive COVID-19 test result has forced a shut down of filming for two weeks. A member of the NBC series’ crew, who had contact with others on the set, tested positive this week. Nick Gehlfuss, Yaya DaCosta, Torrey DeVitto, Brian Tee, Marlyne Barrett, S. Epatha Merkerson, and Oliver Platt star in the medical drama.

Deadline revealed the following about the shut down of the NBC series:

“The person in question, a production team member from a Zone A department, was immediately sent home, sources said. The positive test also triggered guidelines set by the state/county and outlined in the NBCU Production Playbook, including immediate contact tracing. I hear the affected individual’s role had put the person in close proximity to other members of the cast and crew. As a result, Wolf Entertainment and Universal TV are pausing production for 14 days out of an abundance of caution. The cast and crew were just notified of the decision.”

Chicago Med and its sister shows, Chicago Fire and Chicago PD, were among the first to shut down when the pandemic took hold back in March. The series is expected to return to production in October, and the premiere for season six is still scheduled for Wednesday, November 11th.

What do you think? Are you a fan of Chicago Med on NBC? Do you plan to watch season six when it launches in November?

YES, WHEN IT RETURNS WE WILL DEFINITELY BE WATCHING. GOOD SHOW

I will definitely watch the shows – can’t wait….

I absolutely plan on watching it when it starts up again in Nov. Along with Chicago Fire and Chicago PD. They are all 3 terrific shows.