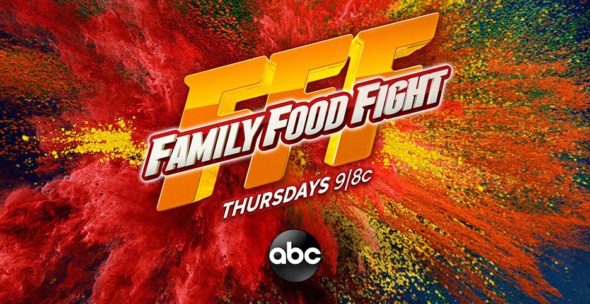 The ABC summer schedule is heavy on game shows and reality TV series. Its latest entry into that category is the Family Food Fight TV show. Does it have all the necessary ingredients to whip up some summertime Nielsen ratings success for the Alphabet Network? Will Family Food Fight be cancelled or renewed for season two? Stay tuned.

8/16 update: You can see the latest night’s ratings in context.


What do you think? Do you like the Family Food Fight TV series on ABC? Should it be cancelled or renewed for a second season?

Get rid of the host. Much like Masterchef season 1. Monotone and boring. More interested in her hair and wardrobe each week. Let Cat host.

The show is a joke. There’s one family on the show that should have been eliminated aged early on, but they are still there. I don’t think they deserve a second season. That’s just my opinion.

My husband & I enjoy this show. However, I think Graham is above being order by Ayesha Curry to ring the bell. Plus , I would like to hear from CatCora and Graham more and the camera being less on Ayesha Curry because it comes off as she needs all the attention. We would like to see a team effort instead of one woman show with two sides kicks who deserve more respect!!!