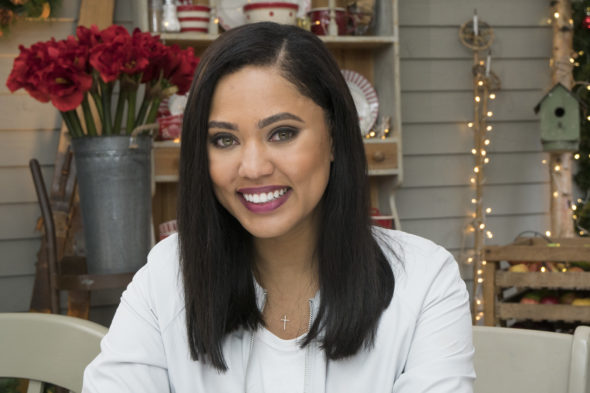 Hosted by Ayesha Curry, the cooking competition series “will feature eight families from across the country sharing a common kitchen and a common goal: to claim the title of America’s No. 1 Food Family.”

ABC has not yet announced a premiere date for Family Food Fight, but you can read more info below:

Whet your appetite! ABC announced today that world-renowned chefs, authors, restaurateurs and television personalities Cat Cora and Graham Elliot will be serving up some knowledge as judges on the upcoming culinary competition series “Family Food Fight,” based on Australia’s hit format. Hosted by restaurateur, food maven and NY Times best-selling cookbook author Ayesha Curry, the competition series will feature eight families from across the country sharing a common kitchen and a common goal: to claim the title of America’s No. 1 Food Family.

Cat Cora has shattered the glass ceiling as one of the first females to dominate the culinary industry, becoming the first female inducted into The American Academy of Chefs Culinary Hall of Fame. As a mom of six, Cora’s passion for health, wellness and food extends beyond the kitchen, having been at the forefront of creating a nationwide revolution of eating well, opening more than 18 restaurants across the U.S. and globally. Having made a commitment to promoting nutrition education, hunger emergency relief and humanitarian aid to reduce hunger worldwide, Cora also created her nonprofit Chefs for Humanity in 2004. She continues to be a leader in her industry as she masterfully synchronizes her award-winning talents with mainstream accessibility, all while she evolves into a space beyond the culinary world.

At age 27, Graham Elliot became the youngest four-star chef to be named in any major U.S. city. The recipient of many prestigious accolades, including multiple James Beard Foundation Nominations, Elliot opened his eponymous restaurant, Graham Elliot, in 2008, which went on to become one of only 15 restaurants in theU.S. to be awarded two Michelin stars. Most recently, Elliot launched his first restaurant project in Asia, Coast at MGM Cotai, in addition to unveiling his new concept, Gideon Sweet, a collaboration with his friend and mentor, Matthias Merges, in Chicago’s West Loop. Elliot extends his relationship with Endemol Shine North America after having participated in 10 seasons of the company’s hit “MasterChef” and “MasterChef Junior” franchise. He is also currently a judge on Bravo’s “Top Chef.”

On “Family Food Fight,” family teams will pull out their best culinary moves in the kitchen, serving up authentic family dishes rich in cultural heritage, taking homestyle cooking to a whole new level. Cora and Elliot, along with host Curry, will lend their expert palates to help determine which family team will walk away with the coveted title of America’s No. 1 Food Family and take home the $100,000 prize. Production is set to begin in Los Angeles later this month. An airdate will be announced at a later date.

What do you think? Are you a fan of cooking competition shows? Will you watch Family Food Fight?