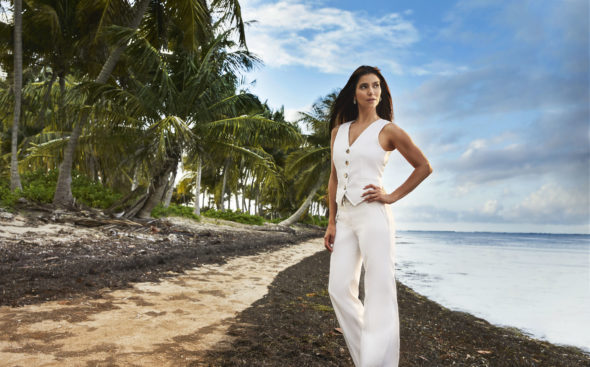 TV show description:
A drama series, the Fantasy Island TV show was created by Liz Craft and Sarah Fain and is based on the 1977-84 show of the same name.

The story is set at a luxury resort, where literally any fantasy requested by guests is fulfilled, although they rarely turn out as expected. Delving into the “what if” questions — both big and small — that keep us awake at night, each episode follows emotional and provocative stories. Different people arrive at the resort with dreams and desires and depart enlightened and transformed through the magical realism of Fantasy Island.

Elena Roarke (Sanchez) is the steward of this mysterious island and is a descendant of the iconic Mr. Roarke. Elena set aside her own ambitions, and even the love of her life, to uphold her family’s legacy. Sophisticated, insightful and always charming, her calm exterior masks the challenges of the responsibilities she has assumed.

Assisting Elena is Ruby Okoro (Barnes), a young woman with an old soul who arrives on Fantasy Island with a terminal illness and is given a new lease on life there. There’s also pilot Javier (Rodriquez), the head of island transportation and a jack of all trades.

What do you think? Do you like the Fantasy Island TV show? Do you think it should be cancelled or renewed for another season?

I love this series, and hope that it is renewed, i look forward to watching it every wee

I love this series. I never expected to even like Fantasy Island & I love it. I hope it renews for another season & soon!