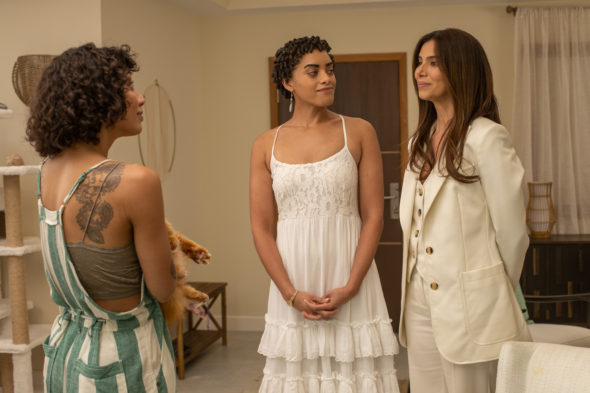 It’s fair to say that the FOX network has a fantasy about this show’s future and Nielsen ratings. Has the Fantasy Island TV show been cancelled or renewed for a third season? The television vulture is watching all the latest cancellation and renewal news, so this page is the place to track the status of Fantasy Island, season three. Bookmark it, or subscribe for the latest updates. Remember, the television vulture is watching your shows. Are you?

A drama series airing on the FOX television network, the Fantasy Island TV show is based on the 1977-84 series of the same name. This incarnation stars Roselyn Sánchez, Kiara Barnes, and John Gabriel Rodriquez, with Alexa Mansour recurring. The story is set at a luxury resort, where any fantasy guests request is fulfilled, although they rarely turn out as expected. Different people arrive at the resort with dreams and desires and depart enlightened and transformed through the magical realism of Fantasy Island. Elena Roarke (Sanchez) is the steward of this mysterious island and is a descendant of the iconic Mr. Roarke. Assisting Elena is Ruby Okoro (Barnes), a young woman with an old soul who arrives with a terminal illness and is given a new lease on life there. There’s also pilot Javier (Rodriquez), the head of island transportation and a jack of all trades, and Helene (Mansour), a young woman who comes to the island looking for her biological father. Guest stars in the second season include Frankie J. Alvarez, James Denton, Izzy Diaz, Rachael Harris, Teri Hatcher, Cheryl Hines, Marie Osmond, Kyla Pratt, Jason Priestley, Andy Richter; Jai Rodriguez, and Lynn Whitfield.

The second season of Fantasy Island averages a 0.20 rating in the 18-49 demographic and 1.75 million viewers. Compared to season one, that’s down by 33% in the demo and up by 3% in viewership in the live+same day ratings (includes DVR playback through 3:00 AM). While these numbers don’t include further delayed or streaming viewing, they are a very good indicator of how a show is performing, especially when compared to others on the same channel. There can be other economic factors involved in a show’s fate, but typically the higher-rated series are renewed and the lower-rated ones are cancelled. Find out how Fantasy Island stacks up against other FOX TV shows.

Will FOX cancel or renew Fantasy Island for season three? The first season’s traditional ratings weren’t great but episodes typically drew 60-75% more viewers in the live+7 day delayed viewing. The network also got a lot of play out of the reruns and the network’s studio is one of the show’s producers (so it gets a piece of the post-network revenue). The network needs hour-long series that it owns, so I think there is a good chance that Fantasy Island will be renewed. I’ll update this page with breaking developments. Subscribe for free alerts on Fantasy Island cancellation or renewal news.

What do you think? Do you hope that the Fantasy Island TV show will be renewed for a third season? How would you feel if FOX cancelled this TV series, instead?