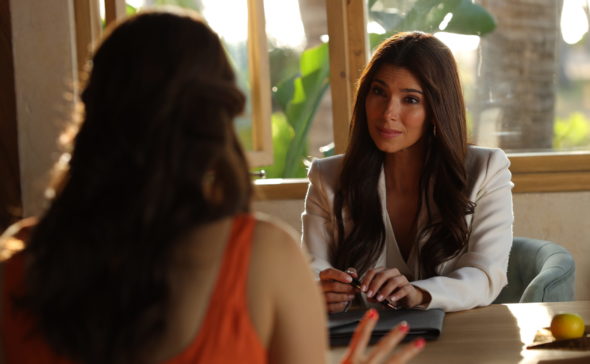 FOX wants to welcome you back to the mysterious resort. The network has renewed its version of Fantasy Island for a second season. A double-episode holiday special will air on December 21st.

A drama series, the Fantasy Island TV show is based on the 1977-84 show of the same name. This incarnation stars Roselyn Sánchez, Kiara Barnes, and John Gabriel Rodriquez. The story is set at a luxury resort, where literally any fantasy requested by guests is fulfilled, although they rarely turn out as expected. Different people arrive at the resort with dreams and desires and depart enlightened and transformed through the magical realism of Fantasy Island. Elena Roarke (Sanchez) is the steward of this mysterious island and is a descendant of the iconic Mr. Roarke. Assisting Elena is Ruby Okoro (Barnes), a young woman with an old soul who arrives with a terminal illness and is given a new lease on life there. There’s also pilot Javier (Rodriquez), the head of island transportation and a jack of all trades.

The first season of Fantasy Island averages a 0.31 rating in the 18-49 demographic and 1.67 million viewers in the live+same day ratings (including DVR playback through 3:00 AM). While these numbers don’t include further delayed or streaming viewing, they are a very good indicator of how a show is performing, especially when compared to others on the same channel. There can be other economic factors involved in a show’s fate, but typically the higher-rated series are renewed and the lower-rated ones are cancelled.

Here’s the renewal announcement and some additional information from FOX:

All-New Special Holiday Episode to Air on December 21 on FOX!

FOX has renewed aspirational drama series FANTASY ISLAND for a second season, it was announced today by Michael Thorn, President, Entertainment, FOX Entertainment. A modern drama series, from Sony Pictures Television, Gemstone Studios and FOX Entertainment, FANTASY ISLAND takes place at a luxury resort, where literally any fantasy requested by guests is fulfilled, although they rarely turn out as expected. Delving into the “what if” questions — both big and small — that keep us awake at night, each episode will tell emotional, provocative stories about people who arrive with dreams and desires and depart enlightened and transformed through the magical realism of Fantasy Island.

The series stars actress, singer and songwriter Roselyn Sanchez as ELENA ROARKE, a descendant of the iconic Mr. Roarke, who set aside her own ambitions, and the love of her life, to uphold her family’s legacy. Sophisticated, insightful and always charming, Elena’s calm exterior masks the challenges of the responsibilities she has assumed as steward of this mysterious island. Kiara Barnes also stars as RUBY AKUDA, a young woman with an old soul who arrived on Fantasy Island with a terminal illness and was given a new lease on life as Roarke’s right hand.

“Thanks to the fantastic Roselyn Sanchez and charming Kiara Barnes and the captivating stories that tapped into the core tenets of emotion and aspiration, FANTASY ISLAND was the perfect wish fulfillment and escape we all needed this summer,” said Thorn. “Liz Craft, Sarah Fain and everyone at Sony and Gemstone did an excellent job on this series and, like all good things, it left us wanting more. We’re so happy to have Elena Roarke, Ruby Akuda and everyone on FANTASY ISLAND open their world again for a brief visit this winter and for a longer stay next year.”

“We are thrilled to be back for a Season Two! Liz, Sarah, Roselyn and the whole Fantasy Island family reimagined this storied IP and gave it just the modern female flair it needed to resonate with audiences around the world. We’re so proud of the show and grateful for our stellar partners at FOX,” said Marie Jacobson, EVP, Gemstone Studios.

This past Summer, FANTASY ISLAND ranked as the #1 new scripted program among Adults 18-49 and was FOX’s most streamed new drama series since 9-1-1: LONE STAR.

All seasons of the original 1977 “Fantasy Island” series and the 1998 remake are available to stream on FOX Entertainment’s free-streaming platform, Tubi.

Catch up on Season One of FANTASY ISLAND with On Demand, FOX NOW and Hulu. On Demand episodes are available for customers of Cox Contour TV, DIRECTV, DIRECTV Stream, DISH, Hulu + Live, Optimum, Spectrum, Verizon FiOS, XFINITY, YouTube TV and many more.

Check out our FOX status sheet to track the network’s new series pickups, renewals, and cancellations. You can find lists of cancelled shows here.
What do you think? Do you like this newest incarnation of the Fantasy Island TV show? Are you glad to hear that it’s been renewed for a second season on FOX?

So happy Fantasy Island is back again!!

So glad this show has a season 2! It was a great escape from all the madness in the world. Just to let everyone know, the two episode holiday special has been pushed to December 23 since two NFL games were postponed per Deadline, so they will be airing on the 21st instead of Fantasy Island. Looking forward to watching this show!

So excited this show has Season 2!!

My husband and I LOVE the new Fantasy Island! We’re so happy it has been renewed for season 2! Thank you!

Yes, I am so glad it got renewed! It’s nice to have a show that isn’t about crimes and murder etc but is mostly feel good !

I am ecstatic that Fantasy Island is back. I love to escape on the island with this fine cast. There are so many stories yet to be told. I hope Leslie Jordan comes back to the island. He was a big highlight from season one. Also, they need to developer more of John Gabriel Rodriquez’s character.

This is wonderful! I love Fantasy Island and am so pleased it renewed! Now I can enjoy another season of well thought out stories,
beautiful scenery, and excellent acting❣️

So happy to hear that this show has been re-newed! I watched the original and love the reboot!

Seriously surprised at this news. The show is pretty mediocre but I guess this network is desperate enough to renew it.