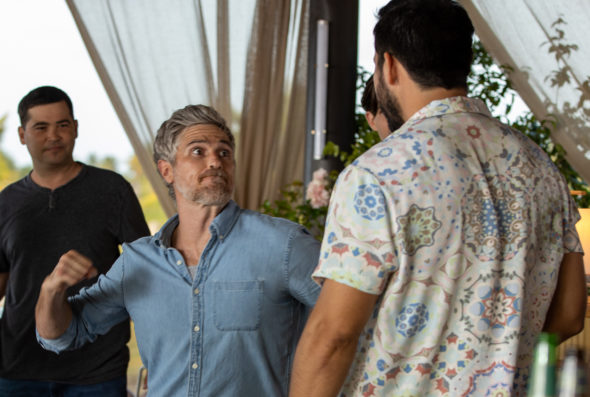 What strange things will happen in the first season of the Fantasy Island TV show on FOX? As we all know, the Nielsen ratings typically play a big role in determining whether a TV show like Fantasy Island is cancelled or renewed for season two. Unfortunately, most of us do not live in Nielsen households. Because many viewers feel frustrated when their viewing habits and opinions aren’t considered, we invite you to rate all of the first season episodes of Fantasy Island here. *Status Update Below.

A FOX drama series, the Fantasy Island TV show is based on the 1977-84 series of the same name. This incarnation stars Roselyn Sánchez, Kiara Barnes, and John Gabriel Rodriquez. The story is set at a luxury resort, where literally any fantasy requested by guests is fulfilled, although they rarely turn out as expected. Different people arrive at the resort with dreams and desires and depart enlightened and transformed through the magical realism of Fantasy Island. Elena Roarke (Sanchez) is the steward of this mysterious island and is a descendant of the iconic Mr. Roarke. Assisting Elena is Ruby Okoro (Barnes), a young woman with an old soul who arrives with a terminal illness and is given a new lease on life there. There’s also pilot Javier (Rodriquez), the head of island transportation and a jack of all trades.

What do you think? Which season one episodes of the Fantasy Island TV series do you rate as wonderful, terrible, or somewhere between? Do you think that Fantasy Island should be cancelled or renewed for a second season on FOX? Don’t forget to vote, and share your thoughts, below.

Fantasy Island shows us that with a little effort, and human kindness, we can make our own destiny brighter. It is a great message during a trying time in our world.

PLEASE keep Fantasy Island on the air! We love, love, love it. This series has the potential of becoming even better than the original show. FANTASY ISLAND rocks!!

My husband and I LOVE the new Fantasy Island! Please renew!

I like the show and the leads. Was very surprised at the many lesbian love stories, but they are well-done.

Love every episode I hope Fox renews it. I went on Foxes instagram and Facebook page and asked yhem not to cancel it. I suggest everyone does the same.

I thought these episodes were touching hungry Christine and Mel loves Ruby were great. Very emotional especially Mel loves Ruby that he loved her so much he wanted her to live. He wanted her on the Island and he could visit her whenever he wanted. Shows true love.

I like the show but not crazy about Ruby. The relationship between her and ms. Roarke feels forced and ruby herself appears a very stilted character.

Loved the reboot of this show! Use to watch the original! I hope this show gets renewed!

I love the original and the remake but I miss Tatoo.

I love the original and I love the remake. I like how it’s updated. I like the stories. Please renew it!!!

Please renew this show. My favorite was the romance and bromance episode although I liked all of them