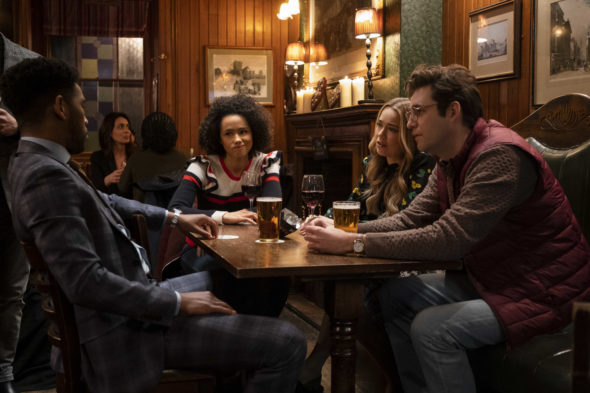 Will Hulu say “I do” to season two? Has the Four Weddings and a Funeral TV show been cancelled or renewed for a second season on Hulu? The television vulture is watching all the latest TV cancellation and renewal news, so this page is the place to track the status of Four Weddings and a Funeral season two. Bookmark it, or subscribe for the latest updates. Remember, the television vulture is watching your shows. Are you?

Unless they decide to publicize viewership statistics, it is difficult to predict whether Hulu will cancel or renew Four Weddings and a Funeral for season two. The rom-com’s premise seems a little difficult to sustain for subsequent seasons without too much of a stretch, unless it turns into an anthology. I’m inclined to think this particular “limited series” will end up as a miniseries, with no second season. Since that’s just speculation, I’ll keep an eye on the trades and update this page with breaking developments. Subscribe for free Four Weddings and a Funeral cancellation and renewal alerts.

What do you think? Do you hope the Four Weddings and a Funeral TV series will be renewed for a second season? How would you feel if Hulu cancelled this TV show, instead?

I loved this show and really loved all of the characters. I watched this show when it first came out and I still think about it. I really hope they find someway to continue the story.

Would be great to see a sequel, the show was better than i thought it would be.

I want another season ASAP. I love the show♡

well worth watching Can’t wait to see whats to comes on second season, Loved it and recommended it to my friends! Love to see where Cash And Maya leed too!

I DEFINITELY want another season! I loved the quirky characters and I want to see more of them.

Yes, please do a second season. At least. I just finished the Season. I will recommend it to friends, with pleasure.

I don’t need another season, thank you.

Yes, please. I would love another season! I found this show by accident. If you bring it back advertise it, and replay the first season. There is an audience out there, but they must know that it exists.

I loved season one and would love to see many more seasons!

Yes yes yes. Great cast. Done so well. on edge of my seat for season 2…3 ,4 5 ect…. STOP CANCELLING AMAZING SHOWS & STOP MAKING US WAIT SO LONG. Shoot season 2 now . Get it up leave it ready for season 3 . 2 not enough. Who doesn’t love this show? Rhetorical. *Just read other posts. I agree there is an updated multi cultural “Friends” vibe. So how can it’s greatness be denied. Plus the need for t.v. that bridges a gap on top of giving us something as influential as Friends was. There is seasons & seasons… Read more »

Yes! Please renew! I like the cast a lot and their chemistry! We need to see more of Kash and Maya.

Yes, at least one more season! Kash and Maya need to see where their relationship goes!

I love this show much, especially Kash and Maya. I never thought Duffy and Gemma would got married. I am looking forward to see more please renewal for season 2

Loved loved it- please – at least one more season!!!

Four Weddings and a Funeral should be renewed for a second season. This show has captured all the best elements of RomCom feature within a series format. The cast and it’s chemistry is like Friends 2.5. It’s so refreshing to see London through American lenses. I hope it will continue. Love it.