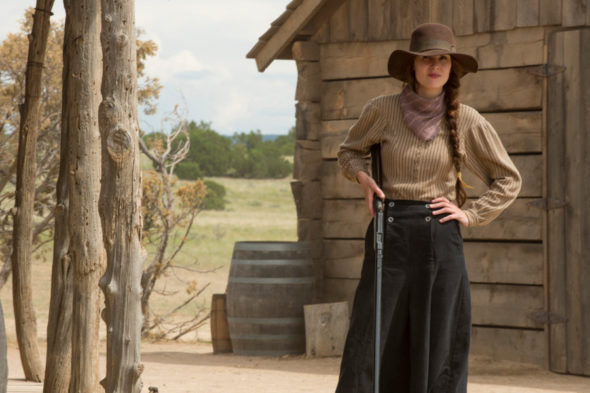 Will Godless have another season? Recently, the cast of the Netflix TV show weighed in on the possibility of a second season, via The Hollywood Reporter.

When asked if they’d like a second season of Godless, cast members seemed to agree the Netflix series should stick with one season only.

It’s got a really nice beginning, middle and end. It’s very popular now-a-days to just make something go on and on and on. At some point, it becomes some sort of money-maker thing and I think as a viewer you can see that and sense that. For me, unless they do something amazing with the writing and as long as it’s appropriate, I think it’s nice to actually have a Netflix show that comes out like this where you have the beginning, middle and end.”

What do you think? Have you seen Godless? Would you watch a second season?

Though I liked season 1,a second season would allow them to do what this season should have done, focus on the amazing women in this series and be driven by them. I hope it gets renewed

I would watch a second season. I’m sad it’s ended

Like everyone else, this was so good I would love to see more, but I do understand the perspective of letting it be “limited” and not making more for the sake of making more money. The real message here is this even with so many places to make and watch quality TV, this incredibly level of quality is still somewhat rare – how could the audience not want more?

I love westerns and this one was a good one. I’d love to see it continue.

Of Course! This mini-series brought back what “True Grit” in the 70s, along with it’s 2011 remake, and “Outlaw Josie Wales” that true western followers have been longing for! The cinematography was absolutely the best. Even got a chuckle when the bee landed on Frank’s forehead after Roy shot him down! Although I’m still waiting for a western to best “Once upon a time in the West”, I would love to see if Mr. Franks and crew could top this with a sequel!

Awesome western, only comparison is Peaky Blinders for acting and writing quality. I can see three possible follow on stories focused on the town, Roy and Alice. Definitely watch another two series if the standard can be maintained.

Best western I’ve ever seen. Amazing cinematography. I love the West and watching this made me feel as if I was there. It should not have another episode. Leave us with this ending.

Would have liked to see a scene of Roy meeting his brother again. Though my preffered ending would be him ending up with the woman.

Let it go! It’s a GREAT story but it’s over… Wonderful Job, Netflix.

I don’t usually watch westerns but I’m enjoying this series very much just started on episode 4. It’s something different – would like another season.

I find it “refreshing dialogue ” for a western with a twist, if you can hold the script to that style, I say YES to another. It’s a good break out for actors like Sam Waterston ( though he gets offed) that might have been getting pigeon holed ,( ie district attorney) I love Michelle Dockery, and Jack O’Connell grows on me as it unfolds. I got no problem killing off Jeff Daniels character, you can always find bad guys in the West!! lol

Why should the actors determine if there is a second season or not? Isn’t it a job for them? If the audience likes the show, the producers should decide.

When he first episode began, I was into it. Then halfway through it slowed to a crawl and I turned it off. Pretty boring. But, I also found, “Bloodline” boring.

Bloodline was beyond boring

To bad, as this is an Outstanding show. But if the actors hearts are not in it, then a second season would probably suck. But this one was ABSOLUTLY FANTASTIC.

good point,…or is it that they want to stay in L.A. for some ungodly reason…signed NM Film Industry Teamster