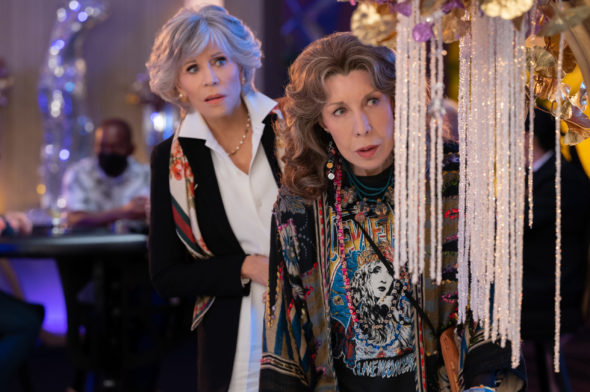 Grace and Frankie is returning to Netflix with its final 12 episodes. The comedy returns on April 29th, and the streaming service has released a trailer ahead of the show’s conclusion. Starring Jane Fonda, Lily Tomlin, Sam Waterston, Martin Sheen, June Diane Raphael, Brooklyn Decker, Baron Vaughn, Ethan Embry, and Peter Gallagher, the series follows two women after they bond over the fact that their husbands have come out of the closet and left them for each other.

Netflix revealed the following about the return of the series:

“Seven years ago, Grace and Frankie’s lives turned upside down when their longtime husbands left them for… each other. Both sparring partners and partners-in-crime, Grace and Frankie formed an unlikely and unbreakable bond as they faced uncertain futures head-on, and hand-in-hand. They’ve laughed together, cried together, did shrooms together, and twice-over became successful entrepreneurs together.

A history-making 94 episodes later, Grace and Frankie continue to show themselves, their families, and their fans what it means to live life to the fullest, fearlessly and unapologetically. Here’s to seven seasons of laughs, tears, mood-enhancers, and good vibes. And, as Grace and Frankie would say, f**k it. This may be their final chapter, but they’re just getting started.”

Check out the trailer for the final episodes of Grace and Frankie below.

What do you think? Will you be sad to see Grace and Frankie end on Netflix?

I’m sorry to see the show end. Not only was it hilariously funny but devoid of drugs and guns and violence. Why can’t we have more of that. I will definitely watch it over again

Love love love watching. My fav scene was Grace trying to get up with the help of scarf and statue. Lots of laughs

Disappointed the show is ending. I’m a big fan of Jane Fonda and Lily Tomlin it was great having them back on screen.