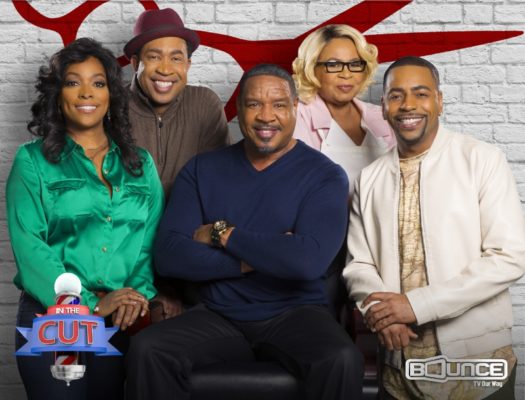 Are you a fan of In the Cut? Recently, Bounce announced season four will premiere in July.

Season four of In the Cut premieres on Bounce TV on July 2nd at 9 p.m. ET/PT.

ATLANTA (June 19, 2018) – Bounce is set to kick off season four of its hit original comedy series In The Cut on Monday, July 2 at 9:00 p.m. ET/PT, with new episodes every Monday night this summer. Season four preview available for viewing here.

Coming off its highly-rated third season, In The Cut stars Dorien Wilson (The Parkers, Dream On) as Jay Weaver, an accomplished entrepreneur and barbershop owner who is kept on his toes by Cheryl, played by Kellita Smith (The Bernie Mac Show, The First Family), the co-owner of the beauty salon next door and his love interest-turned-fiancée. Ken Lawson (The Parkers) returns as Jay’s thirty-something illegitimate son from a short-lived fling now in on the family business, as does John Marshall Jones (The Smart Guy) as fellow barber and pal Smitty. Among this season’s storylines: Marriage planning, pressures of single life, love triangles, hilarious barbershop/beauty shop camaraderie and much more. Guest stars will include Dorion Renaud, Michael Jai White, Kyla Pratt, Emmanuel Hudson, Angie Stone, Wendy Raquel Robinson, Vanessa Simmons, Flex Alexander, Milan Christopher and more.

In 2017, the season three double-episode premiere of In The Cut ranked as Tuesday night’s #1 sitcom vs. all ad-supported cable programming in its time period in Households, Persons 18-49, P25-54 and Total Viewers among Bounce’s target audience of African Americans. This series was created by Bentley Kyle Evans and is produced by Evans and partner Trenten Gumbs, both of whom produce the Bounce TV hit original series Family Time.

In anticipation of season four of In The Cut, viewers can binge-watch seasons one through three on Brown Sugar. Brown Sugar is the popular subscription video-on-demand service from Bounce featuring the biggest collection of the baddest African-American movies of all-time and all of Bounce’s original programming. Brown Sugar is available on Apple TV, Roku, Amazon Channels, Amazon Fire TV, Amazon Kindle, Android and Apple smartphones and tablets and web browsers via BrownSugar.com.

What do you think? Have you seen In the Cut? Will you watch the new season?

I have watched the show from the beginning, the only reason for my purchase of Brown Sugar Channel on Amazon Prime. I LOVE THE SHOW!!! I ABSOLUTELY LOVE In The Cut!!! The show is not just a comedy, it has great story lines! Please renew for SEASON FIVE (5)!!!
Also renew Family Time, for SEASON SEVEN (7) Also a great family show..even with the son in college and the daughter away at cheer camp I still REALLY enjoyed the storyline..and the show!!!