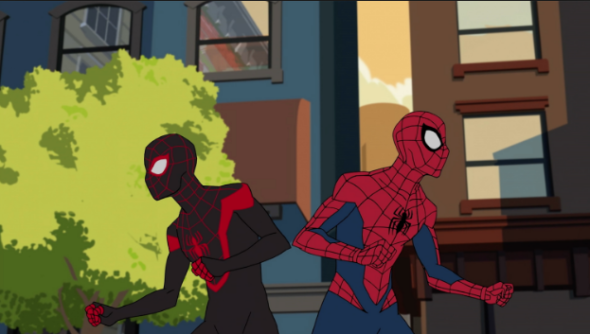 The animated series follows Peter Parker from the beginning, as he transforms from an insecure teenager to a courageous superhero. The voice cast includes Robbie Daymond, Laura Bailey, Nadji Jeter, Josh Keaton, and Nancy Linari.

Season three of Marvel’s Spider-Man is slated to debut on Disney XD in spring 2020.

Disney XD has ordered a third season of the Emmy Award-nominated animated series “Marvel’s Spider-Man” for a spring 2020 premiere. The web-slinging series follows Peter Parker, who is learning to navigate life as the teenage superhero Spider-Man. In the third season, titled “Marvel’s Spider-Man: Maximum Venom,” Spider-Man is pushed to his breaking point when Venom summons an earth-shattering threat from its home planet. The announcement was made today by Marc Buhaj, senior vice president, Programming and general manager, Disney XD.

Buhaj said, “We are excited to have Spider-Man and Venom leading this brand-new chapter. These two characters are fan favorites and the Marvel Animation team has delivered a smart, action-packed season for a new generation. We’re grateful for the opportunity to further expand the world of ‘Marvel’s Spider-Man’ with Venom and continue fresh, heroic storytelling with this third season order.”

“This is the most epic conflict in the history of Marvel Animation,” said Cort Lane, senior vice president, Marvel Animation & Family Entertainment. “We planted the seeds in two seasons of ‘Marvel’s Spider-Man’ and three seasons of ‘Marvel’s Guardians of the Galaxy,’ but you don’t need to have watched them to be blown away by this colossal confrontation. While a ton of guest heroes will be on hand, Peter Parker’s special link to Venom makes him the only hero who can tip the scales to save humanity.”

New season two episodes of “Marvel’s Spider-Man” will debut in September on Disney XD and DisneyNOW, beginning with a five-part “Superior Spider-Man” story arc. In the new storyline, Doctor Octopus, who has taken over Spider-Man’s body, intends to use his new spider powers to further his evil agenda.

During the first part of its second season, Disney XD’s “Marvel’s Spider-Man” ranked as the #1 series on cable in the Monday 6:30 p.m. half-hour timeslot among Kids 6-11 and Boys 6-11.

What do you think? Have you seen Marvel’s Spider-Man? Are you glad it’s coming back?

IDK why didn’t you guys in Disney revive Spectacular instead of marvels. Demands are there, it’s high, there’s even a petition to (re)start The Spectacular Spider Man. I really don’t get it, you had bad shows with Ultimate, as for Marvels i didn’t watch it nor i plan to, but Spectacular i gladly rewatch over again. And instead of trying to revive old show witch is on demand you revive a show that barely few demand..

Thank you thank you THANK YOU!!! No one will ever understand how much this announcement means to me. I’ve loved this show ever since it first came out, and the agony of not knowing when season 2 part 2 will come out, nor if there will BE a season 3, has nearly killed me. Now here’s to hoping there’ll also be a season 4 featuring the Green Goblin…after all, while Venom is one of Spidey’s best villains in terms of action potential and psychological trauma, Norman Osborn (in my opinion) is still #1 in that genre! Please keep all us… Read more »