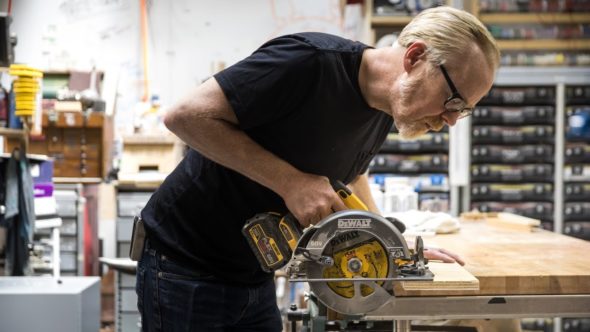 The upcoming series will see Savage build one project per episode with the help of skilled collaborators. Projects include a 3-D suit inspired by Iron Man, a sword forged from meteorite, and monsters made out of junk cars.

(NEW YORK) – Putting his unending curiosity and nearly unparalleled inventiveness to the test, Adam Savage is taking on bigger and badder builds in a new eight-episode series premiering June 12 at 10 p.m. ET/PT on Science Channel. From a 3-D printed titanium suit of armor inspired by Marvel Studios’ Iron Man films that actually flies to experimenting with the highly volatile liquid nitroglycerin, SAVAGE BUILDS will propel Adam into explosive and unpredictable worlds with high stakes payoffs.

Each episode of SAVAGE BUILDS will focus on one project as Adam collaborates with notable experts in their fields, friends, colleagues, and some of his favorite people on the planet. Among those Adam enlists to help sow controlled mayhem are Academy Award-winning filmmaker Peter Jackson, longtime MythBusters collaborator Tory Belleci and Academy Award-winning actor Gary Oldman. Nothing is guaranteed of course when venturing into the unknown, but whether a build is a success or failure, the results are sure to thrill.

In the premiere episode, Adam calls on Richard Browning, the inventor and chief test pilot of the Gravity Jet Suit, which is powered by five 1000 horsepower mini jet engines, to help get Adam’s titanium Marvel Studios’ Iron Man-inspired suit to fly.

· Inventor, maker and roboticist Simone Giertz, and maker Laura Kampf help Adam build three monsters of destruction inspired by Mad Max and other post-apocalyptic worlds using only junk cars and the materials they can salvage from a scrapyard.

· Adam sets out to forge his own version of King Arthur’s legendary sword Excalibur – using the iron from a meteorite.

· Adam does a deep dive into the infamously deadly, impact-sensitive explosive nitroglycerin – and stages a series of daring and dangerous tests to see if this legendarily volatile and unstable explosive lives up to the legend.

· Adam, with the help of his friend Gary Oldman, seeks to build a multi-functional weapon inspired by the classic film The Fifth Element.

· It’s absurd engineering taken to the extreme as Adam stages a Mega Food Fight for the ages – after all, what’s more absurd than figuring out how to make a rapid fire hot dog gun? Adam’s competition for this challenge? His old Mythbusters pal Tory Belleci.

· Adam travels to New Zealand to meet up with esteemed filmmaker Peter Jackson to indulge one of the director’s many passions, World War I. Jackson has a world-class collection of WWI fighter planes – totally authentic except for the fact that the machine guns don’t fire real ammunition, so actual “dogfights” are off the menu. Adam wants to remedy that situation with the most ambitious, high-tech and high-flying aerial dogfight ever attempted.

What do you think? Are you a fan of Adam Savage? Will you watch Savage Builds?

I absolutely love Adam Savage, the man is a genius who wants to explain science to those of us who haven’t a clue!! He is so funny and smart at the same time. He makes learning fun and leaves you wanting more!!!!!please put him back on!!!