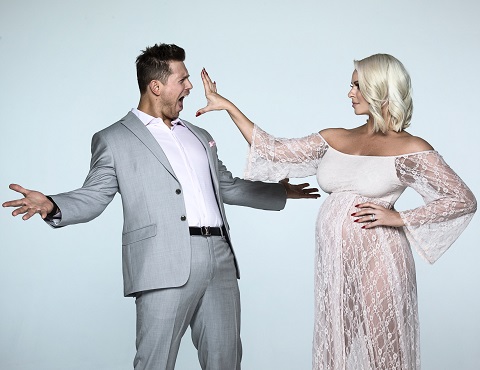 “This season, everything is bigger.” USA Network just announced Miz & Mrs will return with new episodes in April.

The docuseries follows “the A-List lifestyle of married WWE® Superstars, The Miz® and Maryse™.” The new season will see the couple adjust to being new parents.

The “It Couple” is back! USA Network today announced that the hit reality series, MIZ & MRS is set to return for the continuation of its first season on Tuesday, April 2 at 10/9c. The network previously extended the current season, bringing the total to 20, half-hour episodes.

MIZ & MRS gives an exclusive glimpse into the A-List lifestyle of married WWE® Superstars, The Miz® and Maryse™. The power couple has traded the Hollywood Hills for a quiet life in Austin, Texas, but they soon discover there’s nothing “quiet” about a life filled with two dogs, two cats, their adorable baby, Monroe, a crazy live-in mother-in-law and the demands of their high-octane careers. Even though their lives are more chaotic than ever, nothing can slow the “It Family” down. With new mom, Maryse, returning to the ring just months after giving birth and Mike’s career soaring to new heights, The Miz and Maryse continue to prove their outrageous in-ring personalities are no act.

What do you think? Have you seen Miz & Mrs? Will you watch the new episodes?

You are SOOOOO right.

I’d sooner watch paint dry or a test pattern. Wish all this “reality” stuff would tank. It’s all phony as a Ford Corvette.