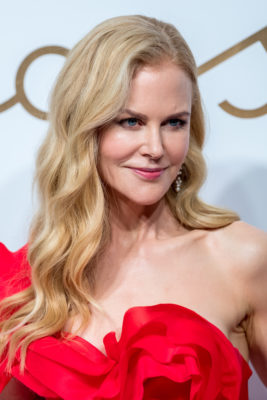 From Kidman and David E. Kelley, the drama series “takes place at a boutique health-and-wellness resort that promises healing and transformation as nine stressed city dwellers try to get on a path to a better way of living.” The show is based on the novel by Liane Moriarty.

Nine Perfect Strangers is slated to debut on Hulu in 2020.

Emmy(R) and Golden Globe Award-winning actress and producer Nicole Kidman and Emmy(R) Award-winning producer Bruna Papandrea will adapt the latest book by New York Times best-selling author Liane Moriarty, Nine Perfect Strangers, for Hulu via their respective production companies, Blossom Films and Made Up Stories. Emmy(R) Award-winner David E. Kelley and John Henry Butterworth will co-showrun and co-write the series. Nine Perfect Strangers was an instant hit that spent 13 weeks on The New York Times Best Seller list. The series takes place at a boutique health-and-wellness resort that promises healing and transformation as nine stressed city dwellers try to get on a path to a better way of living. Watching over them during this ten-day retreat is the resort’s director Masha (played by Kidman), a woman on a mission to reinvigorate their tired minds and bodies. However, these nine “perfect” strangers have no idea what is about to hit them.

The series is the latest project from Blossom Films, Made Up Stories and Endeavor Content. Blossom Films, created by Nicole Kidman and Per Saari, is a lateral thinking production company known for creating content featuring deep and complex characters. Since its inception in 2010 and their first film, RABBIT HOLE, Blossom has aimed to foster creative autonomy and champion artists. Their most recent success comes from executive-producing season one of Big Little Lies, HBO’s groundbreaking limited series, which garnered eight Emmy(R)nominations and five wins, including Best Actress for Kidman and Best Miniseries or Television Film. Made Up Stories is a development, production and finance company committed to creating content with compelling female figures squarely at the center and enabling female creatives to tell the stories they want to tell. Made Up Stories was founded and is run by Papandrea, the award-winning producer of the HBO series Big Little Lies and feature films WILD, GONE GIRL, WARM BODIES and MILK. Endeavor Content specializes in financing, sales and advisory services for television series, documentaries, and feature films. Its primary goal is to empower artists and content creators by providing them with more ownership and creative freedom as they navigate the media landscape. The company’s upcoming TV slate includes Damien Chazelle’s musical drama The Eddy, hit series Killing Eve, and See starring Jason Momoa.

Executive producers for Nine Perfect Strangers include Bruna Papandrea, Steve Hutensky and Casey Haver for Made Up Stories, Nicole Kidman and Per Saari for Blossom Films, Liane Moriarty, David E. Kelley and John Henry Butterworth. Nine Perfect Strangers is expected to debut on Hulu in late 2020 and joins the company’s growing slate of upcoming scripted Hulu Originals, including Little Fires Everywhere, Wu-Tang: An American Saga, Looking For Alaska, Dollface, Reprisal and The Great.”

What do you think? Have you read Nine Perfect Strangers? Will you watch the Hulu series?