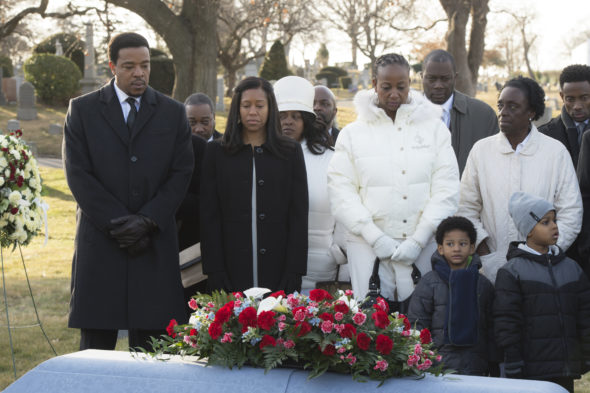 Time flies. Netflix has cancelled its Seven Seconds TV show after just one season. Reportedly, since there will be no season two of the once potential anthology series, the streaming service is likely to submit Seven Seconds for Emmy consideration as Limited Series: Drama. The Seven Seconds cancellation comes in just shy of two months after the Netflix TV series premiered, on February 23rd.

Netflix has released a statement on the Seven Seconds cancellation to Deadline. Check it out.

“We loved working with Veena Sud, Regina King and the cast and crew of Seven Seconds, said Cindy Holland, VP, Original Content, Netflix. “Together they created a compelling, timely and relevant crime drama. The first season is a complete, stand-alone story that we are proud to feature on Netflix for years to come.”

No decision for the cancellation was given but Netflix usually stacks up proprietary viewership data against the price of a show. Seven Seconds, from Fox 21 TV Studios, was an expensive high-end drama which was overall well received by critics, with a 77% rating on Rotten Tomatoes.

What do you think? Did you watch the first season of the Seven Seconds TV series? Is it best as a single season stand-alone TV show? Finally, if it were up to you, would Netflix cancel or renew Seven Seconds for a second season?

So sad to see this show not on for a second season. Amazing acting, compelling story. Always on the edge of my seat. Had to binge watch.

Great show—the characters and superb acting along with a great story line made for a hit. Then after checking to see when the second season would begin I find out it’s cancelled….C’mon Netflix keep it going –definitely a top 5 original show.

Please bring it back!!! It’s not fair that the other cops get off and he only gets the 1 year! Even though, life shows us it’s not always a happy ending, life also shows us that sooner or later, YOU GET CAUGHT. So, leaving the audience out there with that short, half a## ending, is not the message Netflix or producers should be sending out, especially in the wake off all lives matter! Don’t fail short and cancel this very important series!!!

Bring back second series .. this was all left unsolved unfinished business .. frustrated he got 1 year and the cops got off ! Come on …
best acting ever from 2 black female leads

This was such a good show – too bad they cancel the good ones and leave all those NCIS-ish ones on forever. Characters were so real in this.

Who said that Netflix and Amazon isn’t like dealing with networks? Seven Seconds was the only thing on Netflix that got me excited for a LONG time!

Alex
Reply to  Naomi B

Why doesn’t Naomi B like “Homeland” or “Narcos” both shows should get her excited.? Because they are they don’t have a predominately black cast. Narcos is a minority show. Naomi is a little prejudice.

Naomi B
Reply to  Alex

You don’t know me. I don’t like Homeland and Narcos because I don’t like the themes of them. Before passing judgment on people look in the mirror at your own bigotry. Otherwise, you look like a moron. Oh, and clearly you haven’t watched Seven Seconds because it had a balance in race of characters (since clearly this is how you judge a show), including Regina King, who actually brought me to the show.