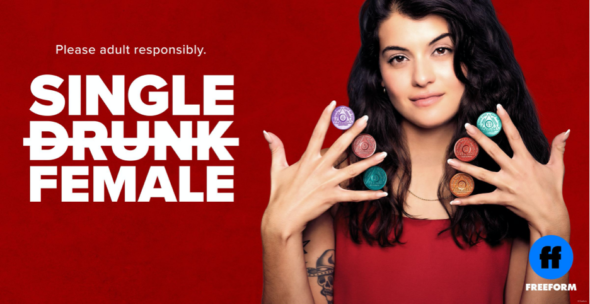 Freeform doesn’t have many original scripted series these days. Could that work in a new show like Single Drunk Female’s favor or, will it all come down to ratings and the bottom line? Will this series be cancelled or renewed for season two? Stay tuned. *Status update below.

A single-camera comedy series, the Single Drunk Female TV show stars Sofia Black-D’Elia, Ally Sheedy, Rebecca Henderson, Sasha Compère, Lily Mae Harrington, and Garrick Bernard with Jojo Brown, Charlie Hall, Madison Shepard, Ian Gomez, Madeline Wise, and Jon Glaser in recurring roles. After a public flame-out at a New York media company, twenty-something alcoholic Samantha Fink (Black-D’Elia) is forced to seize the only chance she has to sober up and avoid jail time — by moving back home with her overbearing “smother”, Carol (Sheedy). Back in Greater Boston, Samantha restarts her life, working at the local grocery store while surrounded by all of the triggers that made her drink in the first place. Confronted with remnants of her old life, Samantha sets out on a path to move past her worst self and figure out her best self. Mostly.

What do you think? Do you like the Single Drunk Female TV series on Freeform? Should it be cancelled or renewed for a second season?

Watched all 10 episodes. Enjoyed show.
Please put SDF on network TV (rerun S1 on ABC during the summer) so we can get some eyeballs on this.
With these ratings, no way do we get a second season.

S1 finale is next week! Enjoying show every week but how low are ratings going to go?!?!

enjoying SDF. But the ratings are horrific. And no same week encore of episode (thought basic cable always did this)

Yo this show is hysterical and is easily going to become one of Freeform’s best-ever series. It’s a nice break from the flood of ‘woke media’ that litters the channel (and modern tv in general) and a vast majority of the people who watch it will find something to relate to in either the main character, her friends or the day-to-day that they trudge through as life carries on. it’s also one of the better depictions of an anon program that i’ve seen on a show. oh yeah and the main actress is fine as hell. cute face slim waist… Read more »