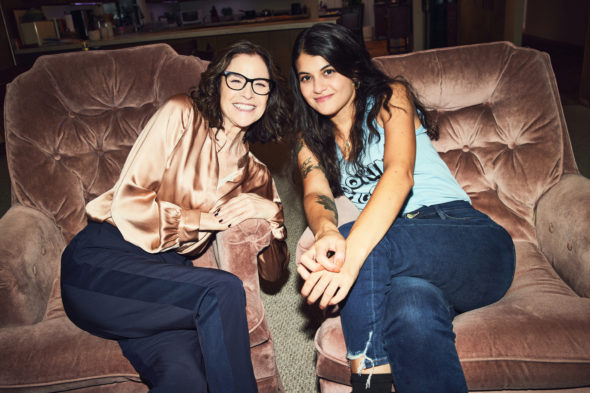 Can Samantha really change? Has the Single Drunk Female TV show been cancelled or renewed for a second season on Freeform? The television vulture is watching all the latest cancellation and renewal news, so this page is the place to track the status of Single Drunk Female, season two. Bookmark it, or subscribe for the latest updates. Remember, the television vulture is watching your shows. Are you?

Airing on the Freeform cable channel, the Single Drunk Female TV show stars Sofia Black-D’Elia, Ally Sheedy, Rebecca Henderson, Sasha Compère, Lily Mae Harrington, and Garrick Bernard with Jojo Brown, Charlie Hall, Madison Shepard, Ian Gomez, Madeline Wise, and Jon Glaser in recurring roles. After a public flame-out at a New York media company, twenty-something alcoholic Samantha Fink (Black-D’Elia) is forced to seize the only chance she has to sober up and avoid jail time — by moving back home with her overbearing “smother”, Carol (Sheedy). Back in Greater Boston, Samantha restarts her life, working at the local grocery store while surrounded by all of the triggers that made her drink in the first place. Confronted with remnants of her old life, Samantha sets out on a path to move past her worst self and figure out her best self. Mostly.

The first season of Single Drunk Female averaged a 0.03 rating in the 18-49 demographic and 107,000 viewers in the live+same day ratings (including DVR playback through 3:00 AM). While these numbers don’t include further delayed or streaming viewing, they are a very good indicator of how a show is performing, especially when compared to others on the same channel. There can be other economic factors involved in a show’s fate, but typically the higher-rated series are renewed and the lower-rated ones are cancelled. Find out how Single Drunk Female stacks up against other Freeform TV shows.

Will Freeform cancel or renew Single Drunk Female for season two? Freeform has touted that this show’s premiere attracted 2.4 million viewers on multiple platforms in the first seven days. That’s the channel’s biggest comedy launch in four years. However, the numbers have dropped a lot in later episodes. Unless the series does really well in delayed viewing, I suspect that it will be cancelled.   I’ll update this page with breaking developments. Subscribe for free alerts on Single Drunk Female cancellation or renewal news.

What do you think? Are you glad that the Single Drunk Female TV show has been renewed for a second season? How would you feel if Freeform had cancelled this TV series, instead?

Great storyline, well written, and wonderful actors. I would love if they sign this show to a second season. I have been in recovery since my mid twenties. I owned a tavern and a liquor store a mile away on the same street. I was 23 when I bought these two business and ended up in recovery 18 months later. I ran them sober for the next 2 decades and I am still in recovery. The main character has got the essence [ fear, confusion, frustration, and getting feelings back] of early recovery. There are comedic moments yet darker images… Read more »

Very true to life or about as true to life as the format allows. While the show skews towards humor, Alcoholism/Addiction is no joke and is thankfully not treated as such by the show! Superb acting by Sofia Black-D’Elia who is able to range from excellent comedic timing to more dark drama. She is far more than a pretty face. I found the show to be funny, entertaining, and grounded in reality. I now look forward to watching it every Thursday! P.S. The comment about the wardrobe I do not get. The lead character dresses no differently than any of… Read more »