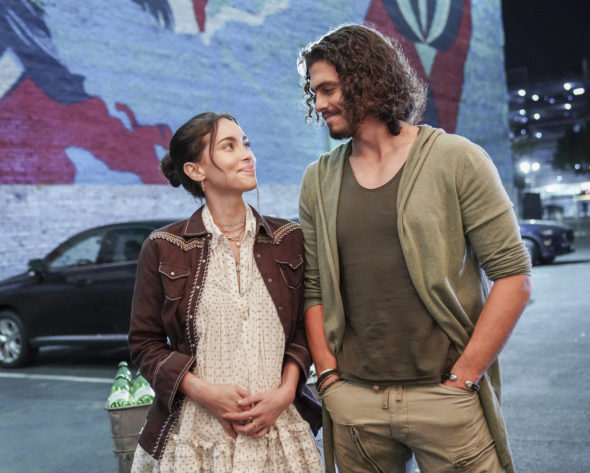 What’s next for the residents of The Coterie? Has the Good Trouble TV show been cancelled or renewed for a fifth season on Freeform? The television vulture is watching all the latest cancellation and renewal news, so this page is the place to track the status of Good Trouble, season five. Bookmark it, or subscribe for the latest updates. Remember, the television vulture is watching your shows. Are you?

Airing on the Freeform cable channel, the Good Trouble TV show stars Maia Mitchell, Cierra Ramirez, Tommy Martinez, Emma Hunton, Sherry Cola, Zuri Adele, Beau Mirchoff, Josh Pence, Priscilla Quintana, and Bryan Craig. Booboo Stewart recurs. The story centers on Callie (Mitchell) and Mariana (Ramirez) from The Fosters series and other residents of Downtown Los Angeles’ The Coterie. They juggle careers, love, and the 20-something growing pains at a time in your life where your friends are your family.

The fourth season of Good Trouble averages a 0.05 rating in the 18-49 demographic and 117,000 viewers in the live+same day ratings (including DVR playback through 3:00 AM). Compared to season three, that’s down by 24% in the demo and down by 30% in viewership. While these numbers don’t include further delayed or streaming viewing, they are a very good indicator of how a show is performing, especially when compared to others on the same channel. There can be other economic factors involved in a show’s fate, but typically the higher-rated series are renewed and the lower-rated ones are cancelled. Find out how Good Trouble stacks up against other Freeform TV shows.

Will Freeform cancel or renew Good Trouble for season five? This is one of the channel’s lower-rated shows but Freeform doesn’t have many original series. I suspect it will be renewed but wouldn’t be surprised if this were the final season either. I’ll update this page with breaking developments. Subscribe for free alerts on Good Trouble cancellation or renewal news.

What do you think? Do you hope that the Good Trouble TV show will be renewed for a fifth season? How would you feel if Freeform cancelled this TV series, instead?

I hope they renew Good Trouble for Season 5 and more seasons after that. Can’t leave us hanging.