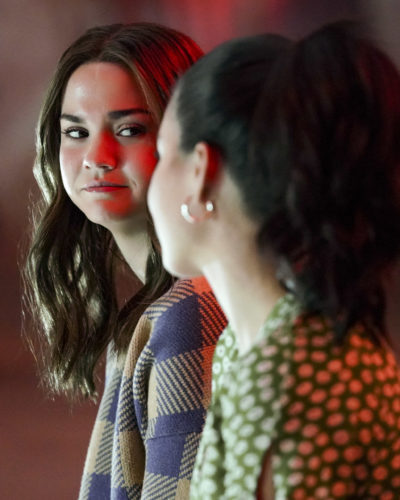 Good Trouble saw a big exit on this week’s episode. Actress Maia Mitchell departed the series to return home to Australia. Her decision was based on the fact that she could not return home to visit her family for the last two years due to the pandemic.

Her character, Callie, departed to work for the ACLU in Washington in the series. Her boyfriend Jamie (Beau Mirchoff) went with her so Mirchoff has also left the series. Mitchell has played the character since 2013 on The Fosters.  Mirchoff took on his role in 2019.

Joanna Johnson, the showrunner of the Freeform series, said the following about Mitchell’s departure, per Deadline:

“I knew that Maia has been playing this character for nine years and that how much she loves this show, and she loves this family. I also knew that she really missed her family a lot – not being able to see them for those two years of COVID. She was ready to make a change.

I knew near the end of season three that she really needed to move on. I asked her if she would stay and do a couple of episodes in season four to give us a little time to give her the right send off, and she was totally game for that.”

The character and actress’ departure was an emotional one. Johnson also spoke about that:

“There was a table read at the end of season three. The scene of the fantasy courtroom scene where she’s talking to Judge Wilson, and he’s talking about her life. What is she doing? Why does she keep getting derailed? Where is she going? Callie’s fears of “What if this is as good as it gets? What if I’m making a mistake?” Those were things that I know were going through Maia’s mind because it’s so hard to leave the family that she’s created, that she’s been with since she was 19 years old.

So, she got choked up on that, and then I just started crying. We both had a little trouble getting through the rest of the table read. It’s very emotional because she’s like a daughter to me, and seeing her and Cierra grow up and go from young women into more mature women you know..it has been such an honor to be able to see that. They do feel like my daughters. I feel very protective of them, and I love them a lot. It felt like someone leaving the nest you know. My kids are younger, but I thought, oh gosh, one day my kids are going to leave the nest and it’s going to feel like this.”

Season four of Good Trouble will continue to air on Wednesday nights.

What do you think? Are you sad to see Mitchell and Mirchoff exit Good Trouble?