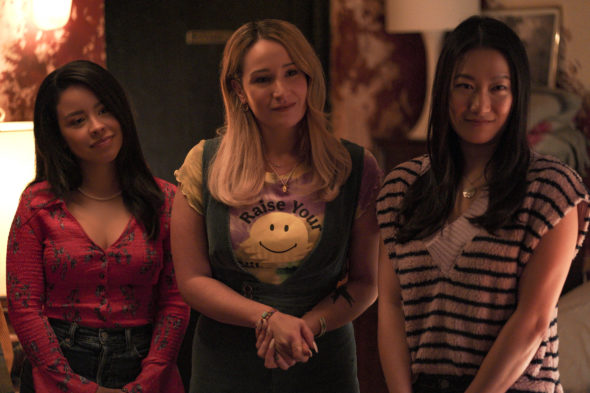 The Coterie Crew will be back. Freeform has renewed Good Trouble for a fifth season. The fourth season is currently airing.

A drama series, the Good Trouble TV show stars Cierra Ramirez, Tommy Martinez, Emma Hunton, Sherry Cola, Zuri Adele, Beau Mirchoff, Josh Pence, Priscilla Quintana, and Bryan Craig. Booboo Stewart recurs. The story centers on Mariana (Ramirez) from The Fosters series and other residents of Downtown Los Angeles’ The Coterie. They juggle careers, love, and the 20-something growing pains at a time in your life where your friends are your family.

Airing on Thursday nights, the fourth season of Good Trouble averages a 0.04 rating in the 18-49 demographic and 102,000 viewers in the live+same day ratings (including DVR playback through 3:00 AM). Compared to season three, that’s down by 35% in the demo and down by 39% in viewership. While these numbers don’t include further delayed or streaming viewing, they are a very good indicator of how a show is performing, especially when compared to others on the same channel.

Freeform has aired 13 episodes of the fourth season so far and season five is expected to air in 2023.

What do you think? Have you been keeping up with the Good Trouble TV series? Are you glad that the Freeform show has been renewed for a fifth season?

I’m in, recently discovered Good Trouble, couldn’t stop watching, now that I’m up to date I started watching the Fosters and I am hooked, characters are well thought out and story lines keep me engaged. These shows are as good as The Gilmore Girls which I also discovered late.