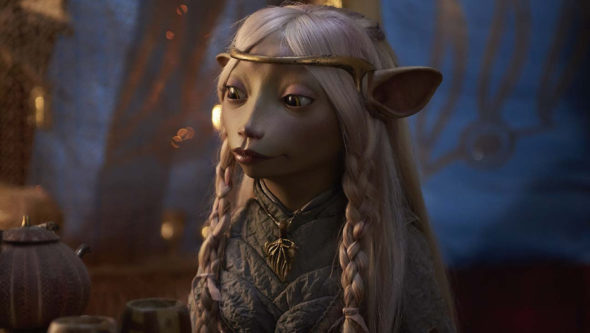 Bad news for the residents of Thra. Despite the fact that The Dark Crystal: Age of Resistance TV series just won an Emmy Award for Outstanding Children’s Program, Netflix has cancelled the fantasy-drama series, choosing not to order a second season.

Weaver narrates the action-adventure, which centers on centers on three Gelfling named Rian (Eggerton), Brea (Dinnean), and Deet (Emmanuel). When the series opens, the world of the Thra is dying. At the heart of Thra is the Crystal of Truth which contains ineffable power. After the evil Skeksis damage it, illness infects the land. Rian, Brea, and Deet discover the secret of Skeksis power and inspire the people to rebel against the forces of Emperor skekSo (Issaacs), the brutal ruler of Thra.

We can confirm that there will not be an additional season of The Dark Crystal: Age of Resistance. We know fans are eager to learn how this chapter of The Dark Crystal saga concludes, and we’ll look for ways to tell that story in the future. Our company has a legacy of creating rich and complex worlds that require technical innovation, artistic excellence, and masterful storytelling.

Our history also includes productions that are enduring, often finding and growing their audience over time and proving again and again that fantasy and science fiction genres reflect eternal messages and truths that are always relevant.

We are so grateful to Netflix for trusting us to realize this ambitious series; we are deeply proud of our work on Age of Resistance, and the acclaim it has received from fans, critics and our peers, most recently receiving an Emmy for outstanding children’s program.

Netflix issued the following statement about the cancellation:

We are grateful to the master artists at The Jim Henson Company for bringing The Dark Crystal: Age of Resistance to life for fans around the world. We’re thankful to the executive producers Lisa Henson and Halle Stanford, and Louis Leterrier, who also directed all episodes, as well as the writers, cast and crew for their outstanding work and thrilled they were recognized with the Emmy this weekend.

The 10 episodes of the prequel series were released by Netflix in August 2019. Decisions to renew Netflix series often come within a month or two of a season’s release so this cancellation doesn’t come as a big surprise.

What do you think? Did you like The Dark Crystal: Age of Resistance TV series? Would you have watched a second season of this Henson series on Netflix?

I really enjoyed the Dark Crystal: A.O.R., at first I thought how could it even compare to the film but I was pleasantly surprised by it, and am sad to see it cancelled.
Sounds like Henson family is looking for a way to keep it going, hope that happens.
One thing I don’t care for is using well know actors as voice talent, because it drives up the cost when plain ole voice actors do a better job, and you usually don’t have to worry about scheduling conflicts, and so forth.

another fantastic show cancelled cmon why it has great reviews and scores and just won an emmy.it didnt get the views netflix wanted and it was expensive to make well maybe ya should a promoted it better.

Netflix is really starting to be a bloody mess… They are cancelling all the good shows… what remains is not so much interesting, I think of cancelling my monthly subscription because it’s starting to piss me off a lot!

I don’t care, I just want the last seasons of Ozark, You and the last kingdom then no cancel my subscription after 3 years.

I don’t care childish Stranger Things and The Witcher even.

The only and probably future good show is Resident Evil and I might come back for that.