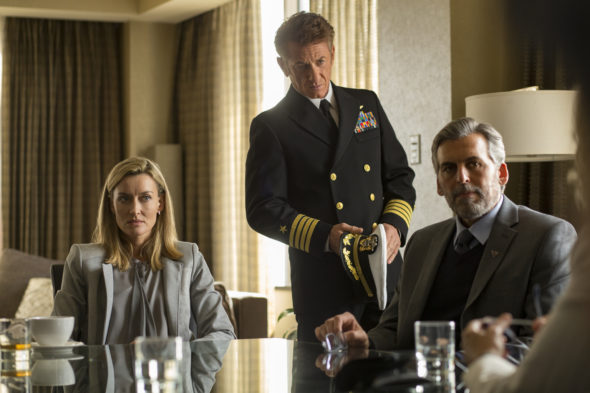 What happened with The First? Recently, Channel 4 executive Ian Katz explained why the TV show was cancelled, Variety reports.

Hulu and Channel 4 cancelled The First after only one season, but why? At the recent Edinburgh TV Festival, Katz said the series ended because it wasn’t relatable to British audiences:

It was possibly born of a moment where lots of British broadcasters were thinking that the way we can compete in this very challenging drama market is to co-produce with big American broadcasters and streamers. [That] was probably an example of a show where that desire to produce something really glossy got in the way of thinking about what really connected with a British audience.”

What do you think? Did you ever see The First? Would you have watched a second season?

Terrible show, tried to watch it but Penn just doesn’t do it . For he tries to be a tough guy what ever he’s in and he’s not. He should go hang with his buddy Chevas or the Mexican cartel

Well, I get that we can’t just have art for art’s sake, but this was probably the best show I’ve seen in a decade. It’s captivating and emotionally wrenching! The writing is fresh. But it’s mear-science fiction, so if trekkiea and Star Wars geeks didn’t like it, that’s because the First is actually well-researched and believable. What is unbelievable is that this show got cancelled! :'(

I loved this show! I thought the acting was brilliant and the plot enticing. I hope another network picks it back up.

Fabulous show, well written with an excellent combination of quality performances, family and technology. Shame to see it go!

I’m afraid that Ian Katz is either misguided or perhaps had a few too many Whiskeys up in Edinburgh. The show was well executed and would be considered as something of a slow burner. It’s story and theme is something that will appeal to many an audience member, both here in the UK and elsewhere and US/UK collaborations are often well done and received. Ian is being rather insulting to UK viewers, indicating that they are not intelligent enough to understand but if we were unable to relate to this then something like 2001 A Space Odyssey would be a… Read more »

YES loved the show. Very disappointed that it was cancelled.