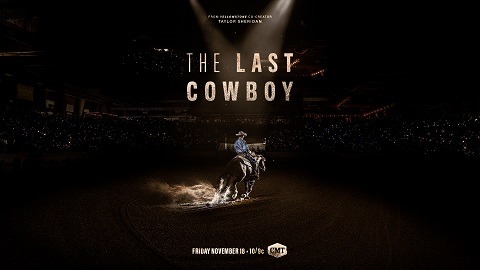 The Last Cowboy is returning to CMT for its third season. The competition series, from Yellowstone creator Taylor Sheridan, will return on Friday, November 18th. In the series, competitors show off their equestrian skills in the sport of horse reining.

CMT revealed more about the upcoming season in a press release.

CMT today announced “The Last Cowboy” is back for an exciting third season. From Academy Award(R) nominee and “Yellowstone” co-creator Taylor Sheridan, the high-stakes competition series returns on Friday, November 18th at 10p/8c.

The Last Cowboy takes an inside look at the lives of today’s cowboys and cowgirls as they compete in the sport of horse reining – a Western-based competition consisting of horses guided through a precise pattern of circles, spins and stops by their experienced riders – and gear up for “The Run for a Million.” This season goes deep into the grueling preparation as riders train to elevate and preserve their cowboy traditions in this trying athletic event. This year’s skilled participants include:

Paramount Media Networks & MTV Entertainment Studios is one of the preeminent media entities in the world that connects with global audiences through its nine iconic brands – MTV, Comedy Central, VH1, CMT, Pop, Logo, The Smithsonian Channel, Paramount Network and TV Land – and its Studios arm which produces acclaimed series and movies as well as award-winning documentaries through MTV Documentary Films.”

What do you think? Do you plan to check out The Last Cowboy season three on CMT next month?

Lovr the show ~ Cant wait to watch it!!

We will definitely be watching!