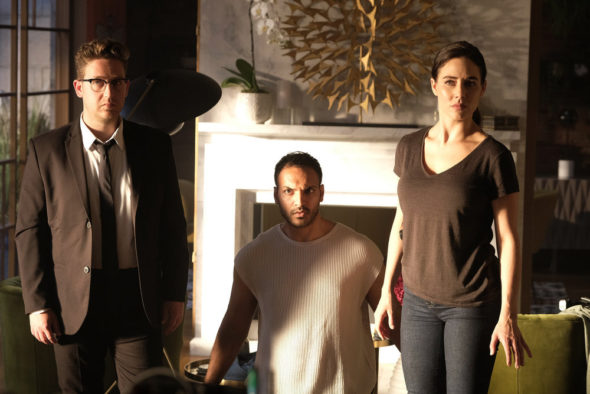 In its fourth season, does The Magicians TV show on Syfy still have the magic touch? As we all know, the Nielsen ratings typically play a big role in determining whether a TV show like The Magicians is cancelled or renewed for season five. Unfortunately, most of us do not live in Nielsen households. Because many viewers feel frustration when their viewing habits and opinions aren’t considered, we’d like to offer you the chance to rate all of The Magicians season four episodes, below.

A supernatural Syfy drama, The Magicians stars Jason Ralph, Stella Maeve, Olivia Taylor Dudley, Hale Appleman, Arjun Gupta, Summer Bishil, Rick Worthy, Jade Tailor, Brittany Curran, and Trevor Einhorn. The series follows Quentin Coldwater (Ralph) and his friends as they hone their magical abilities and fight off evil threats. Last year ended with The Monster finding a mind-wiped Quentin. In season four, it will also seek out the others, and something else, as well. .

What do you think? Which season four episodes of The Magicians TV series do you rate as wonderful, terrible, or somewhere between? Are you glad that Syfy renewed The Magicians for a fifth season? Don’t forget to vote, and share your thoughts, below.

Do not cancel this show. Thank you

I absolutely LOVE THIS SERIES. Very well scripted and you can’t help but be drawn to all of the characters. I can’t wait for season 5!

Please please don’t cancel the show!! I’m in Love with all of the cast and the writers and there’s nothing else on television like this show. I’m a fan since day one!! Season 5!!!!

The third season of the Magicians simply blew me away. Truly, I thought the screenplay and performance was Emmy worthy. This year, 1st Episode I found myself so starved for the show I kept wishing the episode was at least two hours long. Seriously this is my favorite show and I don’t dole out these compliments easily. I’m a critical viewer. When I see great creativity I know it, can’t wait for the next episode AND SEASON FIVE!