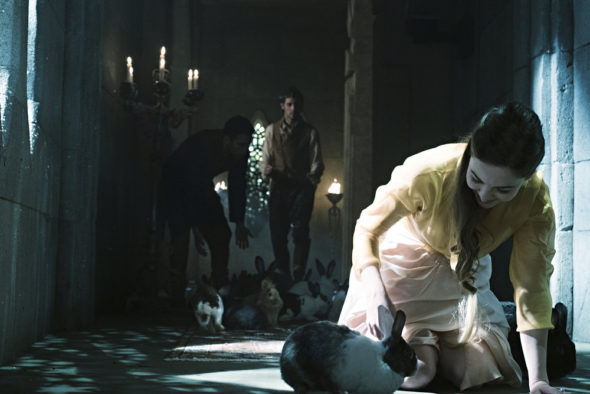 How magical is the third season of The Magicians TV show on Syfy? As we all know, the Nielsen ratings typically play a big role in determining whether a TV show like The Magicians is cancelled or renewed for season four. Unfortunately, most of us do not live in Nielsen households. Because many viewers feel frustration when their viewing habits and opinions aren’t considered, we’d like to offer you the chance to rate all of The Magicians season three episodes, below.

A supernatural Syfy drama, The Magicians stars Jason Ralph, Stella Maeve, Olivia Taylor Dudley, Hale Appleman, Arjun Gupta, Summer Bishil, Rick Worthy, and Jade Tailor. Brittany Curran and Trevor Einhorn join as season regulars in season three. Based on the Lev Grossman novels, the story follows Quentin Coldwater (Ralph) and his friends as they hone their magical abilities and fight off evil threats. In the second installment, they plotted to get rid of an evil deity, but in doing so eliminated magic. Now begins their quest to restore it.

What do you think? Which season three episodes of The Magicians TV series do you rate as wonderful, terrible, or somewhere between? Should Syfy cancel or renew The Magicians for a fourth season? Don’t forget to vote, and share your thoughts, below.

Per the Magicians Facebook page, it has been renewed for season 4! https://www.facebook.com/MagiciansSYFY/?ref=br_rs

The show was renewed back in February: https://tvseriesfinale.com/tv-show/magicians-season-four-renewal-syfy-tv-show/

This show started out OK but recently has evolved into a gross, cursive and sexually focused despair.