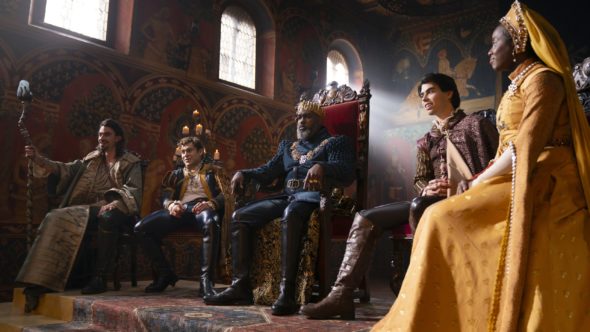 The Quest is coming soon to Disney+. The streaming service has set a premiere date in May for the new fantasy show with a reality competition series at its center. A previous iteration of The Quest aired on ABC for one season in 2014 before being cancelled.

“Today, Disney+ asked audiences at Wondercon, “Do you have what it takes to save the Kingdom?” as they were welcomed to Everealm, the world at the center of the unique new Original Series, The Quest, streaming May 11 only on Disney+.

For thousands of years, Everealm has been a land of unrivaled beauty and powerful magic. Now, the realm is threatened by a powerful evil Sorceress. As a last hope, the noble Fates summon eight strangers known as Paladins from a world beyond to work together to fulfill an ancient prophecy and vanquish the Sorceress. The Paladins must unlock the hero within through a series of challenges that push their limits to restore balance to Everealm. If they fail, all will be lost. Heroes will rise. Kingdoms will fall.

Brought to the screen by the Academy Award®- and Emmy®-winning teams behind The Lord of the Rings, The Amazing Race and Queer Eye, The Quest is a groundbreaking, immersive, hybrid competition series that drops eight real-life teenagers (Paladins) into the fantastic, fictional world of Everealm, where they must save a kingdom by fulfilling an ancient prophecy. Throughout the eight-episode series, these heroes are immersed in a fantasy world come to life, complete with a castle, royals, ethereal fates, all forms of mystical creatures and a sorceress intent on destruction and power.

The Quest combines the best elements of scripted and unscripted content to create an immersive competition series where fantasy and reality collide as the teens compete in challenges in a fully-realized world of adventure. Each Paladin’s mind, body, and soul will be put to the test with new surprises around every corner of the unknown land, changing not only the fate of Everealm, but also their own.

“We’re doing something magical that has never been done at this level. We’re taking real people and putting them in a fully realized fantasy story, conceived and built by incredible artisans in every department,” say Jane Fleming and Mark Ordesky, executive producers, Court Five. “It’s an immersive, real-life hero’s journey for these eight normal teenagers, who transform before your very eyes. It’s an exciting new form of storytelling.”

“What makes The Quest so unique is that it’s a true hybrid of scripted and reality,” say Elise Doganieri and Bertram van Munster, executive producers, New Media Collective. “It’s a groundbreaking new genre where we place real teenagers in a reality competition and bring them into a fully realized fantasy world that is built on a scripted mythology of intrigue and adventure played out alongside actors for a completely immersive experience.”

“We were very focused on the aesthetic of the show, from production design through costume design, making sure that everything felt authentic. We wanted both our Paladins and our audience to feel immersed in the epic world we created,” say Michael Williams and Rob Eric, executive producers, from Scout Productions.

Check out a preview for The Quest below.

What do you think? Are you planning to check out The Quest on Disney+ next month?

I’m not happy that this show is on Disney plus, it should be on Hulu or Netflix or Amazon Prime, I’ve been watching The Quest since it came on tv , please put on other streaming devices