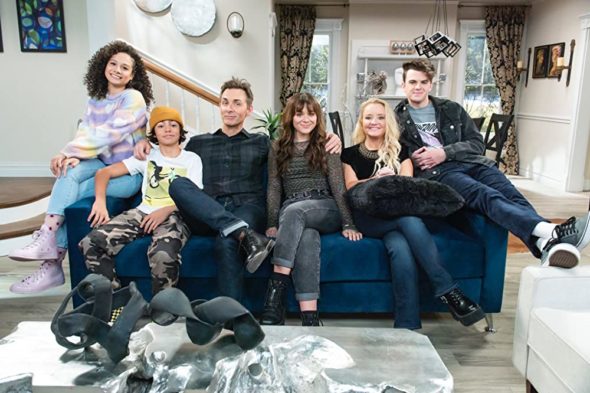 Disney Channel has two new live-action shows coming this June. The cable channel has announced the premiere dates for Ultra Violet & Black Scorpion and The Villains of Valley View . The two shows — one focusing on a pair of superheroes and the other focusing on a family of villains — will arrive on June 3rd.

Disney Channel revealed more about both new series in a press release.

The Villains of Valley View, centered around a teenage supervillain and her family as they are forced to uproot their lives and change identities, will premiere with two back-to-back episodes at 8:00 p.m. EDT/PDT. Ultra Violet & Black Scorpion, following Mexican American teen Violet Rodriguez who is chosen by a magical luchador mask that transforms her into the superhero Ultra Violet, will follow with two back-to-back episodes at 9:00 p.m. EDT/PDT. Both series will stream shortly thereafter on Disney+.

Normal is overrated in The Villains of Valley View.

When teenage supervillain Havoc stands up to the head of the League of Villains, her family is forced to change their identities and relocate to a sleepy Texas suburb. With the help of her effervescent new neighbor Hartley, Havoc — going incognito as Amy — must somehow hide her superpowers and quell her villainous nature in favor of something she and the rest of her family have fought against all their lives: being normal.

The Villains of Valley View is created by Chris Peterson and Bryan Moore (“Lab Rats”), who also serve as executive producers and showrunners.

Violet Rodriguez, an everyday Mexican American teen, is chosen by a magical luchador mask which transforms her into Ultra Violet, a superhero fighting crime alongside her luchador uncle, Cruz, also known as Black Scorpion. Although Cruz takes Violet under his wing to teach her the responsibilities of her special powers, she doesn’t always see eye to eye with him when it comes to his methods for capturing crooks. In the meantime, she must keep her superhero identity secret from her parents and her older brother Santiago (“Tiago”), as well as her friends and schoolmates. However, she does lean on one close confidante: her best friend Maya Miller-Martinez, who provides advice and assists with documenting Ultra Violet’s adventures on social media.

Check out trailers for both shows below.

What do you think? Are you planning to check out these new shows on the Disney Channel?

I wonder whether Disney was aware of Roger Corman’s Black Scorpion, a ’90s veteran super-heroine of two TV movies for Showtime and a season of TV episodes for the SciFi Channel, who was finally adapted in comic books by Bluewater Comics in 2009. There was also a 90s WCW wrestler character called The Black Scorpion. And there was a comic-book Black Scorpion from Special Studios in 1991 who was a pastiche of The Green Hornet. In other words, trademark claimants are likely to be coming out of the woodwork before the show even premieres. Ultraviolet was also a Milla Jovavich… Read more »