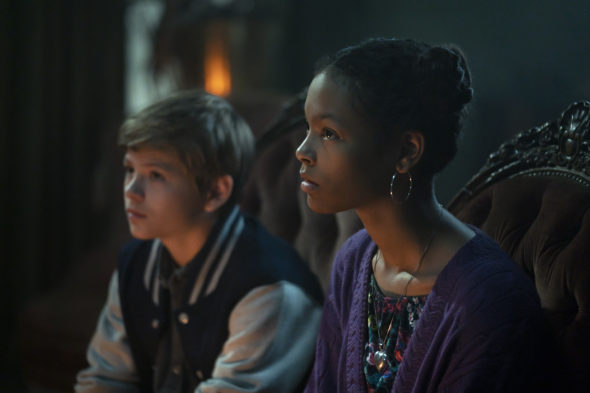 The adventures for Griffin and her friends are far from over. Season two episodes of the Secrets of Sulphur Springs are currently being released on Disney Channel and now, the live-action show has been renewed for a third year.

A live-action, time-travel mystery series, Secrets of Sulphur Springs stars Preston Oliver, Kyliegh Curran, Elle Graham, Kelly Frye, Landon Gordon, Madeleine McGraw, and Diandra Lyle. Johari Washington, Ethan Hutchison, Eugene Byrd, Kenneisha Thompson, and Robert Manning Jr recur in season two. The story follows 12-year-old Griffin Campbell, whose family has uprooted their lives to move to a new town and take ownership of an abandoned hotel, The Tremont, in hopes of restoring it back to the lively vacation destination it once was. Not long after, Griffin learns that the hotel is rumored to be haunted by a ghost. Griffin and his best friend Harper, a bright-eyed, mystery-obsessed classmate, and Savannah, a girl who lives in the 1960s, work together to solve the mysteries of the supernatural forces at The Tremont by traveling through time via a secret portal in the basement of the hotel.

Season two of the series takes Griffin, Harper, and Savannah back to the 1930 and 1962 to learn more about Harper’s family’s deep-seated connection to the hotel. In season three, a new ghost will torment The Tremont. Also, Griffin will travel to the future and then back to his present, where he and Harper will have to change the timelines of their lives in order to save their friendship and their families.

Season two of Secrets of Sulphur Springs concludes on February 25th. A premiere date and additional details about season three will be released in the future.

What do you think? Have you or someone in your home watched the Secrets of Sulphur Springs series? Are you glad to hear that it’s been renewed for a third season?

Im addicted to this Show so well thought out its captivating and inquisitive it utterly consumes you cant wait sor season 3! X

So excited!!My husband and I love this series and even had our 21 ye old son watching with us as we ate breakfast. Just a wonderful show!