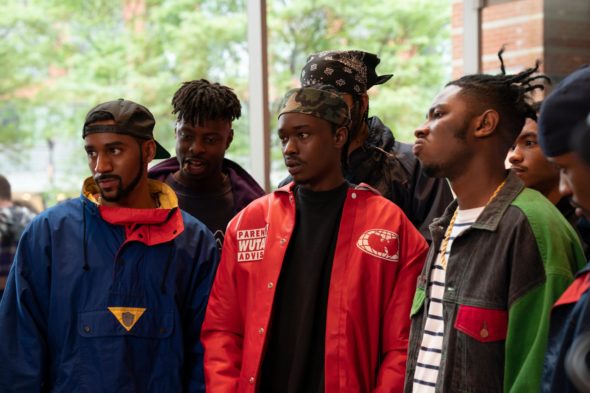 Can Bobby keep this group together in the second season of the Wu-Tang: An American Saga TV show on Hulu? As we all know, the Nielsen ratings typically play a big role in determining whether a TV show like Wu-Tang is cancelled or renewed for season three. Hulu and other streaming platforms, however, collect their own data. If you’ve been watching this TV series, we’d love to know how you feel about the second season episodes of Wu-Tang: An American Saga here. *Status Update Below.

A Hulu drama series, the Wu-Tang: An American Saga TV show is based on the true story of the Wu-Tang Clan, one of the most influential and important groups in hip-hop history. The series stars Ashton Sanders, Shameik Moore, Siddiq Saunderson, Julian Elijah Martinez, Marcus Callender, Zolee Griggs, TJ Atoms, Dave East, Johell Young, Uyoata Udi, and Damani Sease. Set in the early ’90s in New York City, at the height of the crack cocaine epidemic, the show tracks the Clan’s formation, a vision of Bobby Diggs aka The RZA (Sanders), who strives to unite a dozen young, black men that are torn between music and crime but eventually rise to become the unlikeliest of American success stories. In season two, the Clan is disillusioned with life in the projects, and Bobby knows that success in the music industry could be their ticket to better lives. But getting the Clan members to drop everything for music isn’t easy. The resentment between Dennis (Saunderson), Sha (Moore), Power (Callender), and Divine (Martinez) still runs deep, while the other Clan members struggle to deal with intercity life. This time around, Bobby is dedicated to authenticity, and though he knows he can lead his crew through the music business’ challenges, the Clan’s fractures may prove too much to overcome.

What do you think? Which season two episodes of the Wu-Tang: An American Saga TV series do you rate as wonderful, terrible, or somewhere between? Do you think that Wu-Tang on Hulu should be cancelled or renewed for a third season? Don’t forget to vote and share your thoughts below.