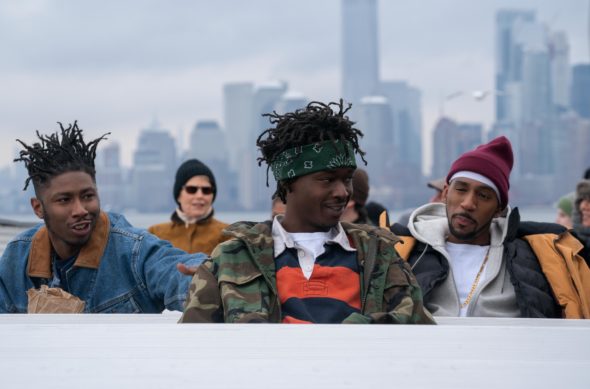 Will the Clan find success soon? Has the Wu-Tang: An American Saga TV show been cancelled or renewed for a third season on Hulu? The television vulture is watching all the latest cancellation and renewal news, so this page is the place to track the status of Wu-Tang: An American Saga, season three. Bookmark it, or subscribe for the latest updates. Remember, the television vulture is watching your shows. Are you?

Streaming on the Hulu subscription service, the Wu-Tang: An American Saga TV show is based on the true story of the Wu-Tang Clan, one of the most influential and important groups in hip-hop history. Ashton Sanders, Shameik Moore, Siddiq Saunderson, Julian Elijah Martinez, Marcus Callender, Zolee Griggs, TJ Atoms, Dave East, Johell Young, Uyoata Udi, and Damani Sease star. Set in the early ’90s in New York City, at the height of the crack cocaine epidemic, the show tracks the Clan’s formation, a vision of Bobby Diggs aka The RZA (Sanders), who strives to unite a dozen young, black men that are torn between music and crime but eventually rise to become the unlikeliest of American success stories. In season two, the Clan is disillusioned with life in the projects, and Bobby knows that success in the music industry could be their ticket to better lives. But getting the Clan members to drop everything for music isn’t easy. The resentment between Dennis (Saunderson), Sha (Moore), Power (Callender), and Divine (Martinez) still runs deep, while the other Clan members struggle to deal with intercity life. This time around, Bobby is dedicated to authenticity, and though he knows he can lead his crew through the music business challenges, the Clan’s fractures may prove too much to overcome.

Unless they decide to publicize viewership, it is difficult to predict whether Hulu will cancel or renew Wu-Tang: An American Saga for season three. Since Hulu isn’t predominantly ad-supported, it can take a chance on series it believes in and stories that need telling, but sooner or later, it comes down to production costs versus viewership numbers. I feel like this one could go either way, but I think Hulu will likely renew it. I’ll keep my ears open and an eye out for news and will update this page with breaking developments. Subscribe for free alerts on Wu-Tang: An American Saga cancellation or renewal news.

11/5/2021 update: Wu-Tang: An American Saga has been renewed for a third and final season.

What do you think? Are you glad the Wu-Tang: An American Saga TV show has been renewed for a third season? Are you sorry to know that season three is the end?

It would be dumb of the network to not renew for a 3rd season and even a 4th.

Plus all the spin off grave diggers, sons of man, killer priest, remedy, the swarm, Killa army, many more.

3rd season please even a fourth season of watch you can have the third season about blowing up with 36 Chambers four season about all this solo albums. 5th season about wu- forever. Make A movie please

We need a 3 rd season of the Wutang saga! Every week I can’t wait for new episode to air. Thank you Rza for blessing the world with your stories. Wutang Clan is for the people/children!