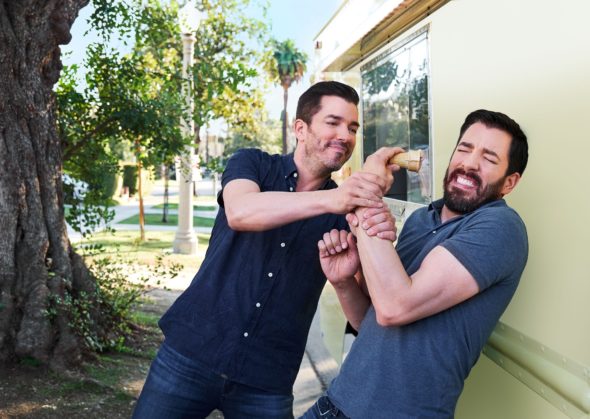 Brother Vs Brother is returning for another season! HGTV has renewed the competition series for season eight. The show features brothers Drew and Jonathan Scott going head-to-head flipping houses. Six new episodes will air this summer.

“Superstar Brothers Drew and Jonathan Scott will return in a newly greenlit six-episode season of Brother vs. Brother, HGTV’s high-stakes house-flipping competition. More than 21 million total viewers watched the previous season where Drew bested Jonathan for the crown, and the rivalry is far from over. In the next season, the guys are back in the Los Angeles-area to turn lukewarm homes into hot-ticket properties, and the Brother whose renovated property flips for the most profit will score coveted bragging rights. Brother vs. Brother is slated to premiere in summer 2022.

“You can bet that when we combine Drew and Jonathan’s real estate and renovation expertise with their favorite past-time, one-upmanship, we’ll get a monumental, fun face-off that delivers awe-inspiring designs and valuable home improvement takeaways,” said Jane Latman, president, HGTV & Streaming Home Content, Discovery, Inc. “Brother vs. Brother taps into a lifelong sibling rivalry that audiences can’t get enough of and when the brotherly mischief, practical jokes and trash talk of competition ends, will it be Drew or Jonathan who gloats as a champion or whimpers in defeat — this time?”

What do you think? Are you a fan of Brother Vs Brother on HGTV? Do you plan to watch the new season next year?