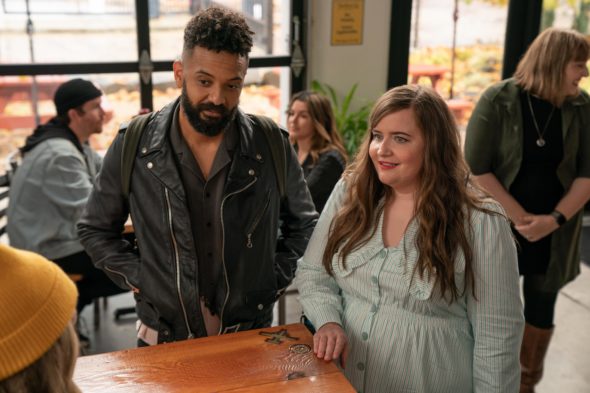 Will there be a happy ending for Annie in the third season of the Shrill TV show on Hulu? As we all know, the Nielsen ratings typically play a big role in determining whether a TV show like Shrill is cancelled or renewed for season four (in this case, we know season three is the end). Hulu and other streaming platforms, however, collect their own data. If you’ve been watching this TV series, we’d love to know how you feel about the third season episodes of Shrill here.

A Hulu comedy series, the Shrill TV show stars Aidy Bryant, Lolly Adefope, Ian Owens, John Cameron Mitchell, E.R. Fightmaster, and Patti Harrison. Based on the Shrill: Notes from a Loud Woman book by Lindy West, the series follows Annie Easton (Bryant), a journalist who juggles bad boyfriends, sick parents, and a perfectionist boss. She’s an overweight young woman who feels a deep desire to change her life but, not her physique. Season three finds Annie energized by her breakup with dud boyfriend Ryan and her newfound momentum at work. Annie feels like everything is finally falling into place for her, but does she actually know how to get what she wants?

What do you think? Which season three episodes of the Shrill TV series do you rate as wonderful, terrible, or somewhere between? Do you think that Shrill on Hulu should have been renewed for a fourth season? Don’t forget to vote, and share your thoughts, below.