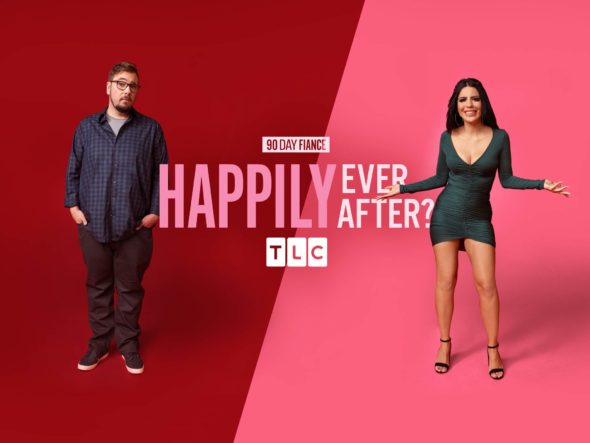 90 Day Fiance: Happily Ever After? is returning for a sixth season. TLC has ordered a new season of the reality series that follows what happens to couples after they appear on the 90 Day Fiance show.

TLC revealed more about the return of the series and the participants in a press release:

“New marriages, frosty separations and more are in store for the brand-new season of 90 DAY FIANCE: HAPPILY EVER AFTER? Premiering on Sunday, April 25th at 8PM ET/PT on TLC and available for streaming discovery+, HAPPILY EVER AFTER? catches up with unforgettable couples from previous seasons of the 90 Day universe. TLC will follow these couples where they last left off as they move forward in the next chapter of their relationships. After following these couples’ victories, trials and tribulations, viewers will see the many painful realities and unexpected obstacles ahead as they continue to navigate cultural differences, in-laws, transgressions and more. Viewers can catch a sneak peek of the new season in this Sunday’s episode of 90 DAY BARES ALL, streaming on discovery+.

Season six will catch up with the following couples and three more, to be announced soon:

Angela, 54 (Hazlehurst, Ga.) and Michael, 32 (Nigeria)
Angela and Michael were eager to continue their life together after they finally tied the knot in Nigeria. Unfortunately, their wedding bliss was followed by sad news concerning Angela’s mother’s health. Angela quickly rushed back home and shortly after her mother passed, Angela found herself alone to deal with the grief and stress of the pandemic without Michael. Driven to live a healthier life for her grandchildren and husband, Angela decides to undergo weight loss surgery despite Michael’s strong disapproval. Although Angela’s health is her priority, Michael’s desire to have children is at the forefront of his mind.

Kalani, 32 (Washington, Utah) and Asuelu, 25 (Samoa)
Married life has had its fair share of rough patches for Kalani and Asuelu. With Kalani’s feelings of doubt caused by a long history of family conflict, the couple is working through some tough challenges. They are hoping for a fresh start and begin looking for a house. Asuelu thinks that living on their own, away from Kalani’s family, will help their relationship, and Kalani is willing to give it one last try. Meanwhile, Kalani’s sister Kolini comes to stay with them for a few weeks and questions their decision to buy a house, knowing how rocky their marriage has been over the years. Kalani opens up to Kolini about her and Asuelu’s intimacy issues and that she feels that they are more like roommates than husband and wife.

Elizabeth, 30 (Tampa, Fla.) and Andrei, 34 (Moldova)
Three years into married life, Elizabeth, Andrei and their daughter Eleanor continue to move forward as a family. Much to Elizabeth’s relief, Andrei is finally ready to give up being a stay-at-home dad and start working. But to get started, Andrei will need help from Elizabeth’s father Chuck and Elizabeth’s siblings have strong opinions about him getting into business with their dad, in any capacity. Later on, the whole family travels to Maryland for a family reunion and Chuck hopes it will bring everyone together, but the drama ensues.

Tiffany, 29 (Frederick, Md.) and Ronald, 31 (South Africa)
The last few months have taken a toll on single mom Tiffany, and she feels like her husband Ronald, who is still living in South Africa, hasn’t stepped up enough emotionally or financially. Tiffany stresses to Ronald that she is tired of carrying the financial burden in their relationship and that if Ronald wants to see his family he needs to start contributing. Ronald is furious that Tiffany would behave this way and thinks that she is spending money on herself instead of for their relationship. Adding to those challenges, Ronald worries that his Visa will be denied, in which case he would want the family to move to South Africa. Tiffany is not on board with this plan and does not know what will happen if his visa is not approved.

HAPPILY EVER AFTER? will premiere following the season eight finale of the show that started it all, 90 DAY FIANCÉ, which is currently averaging a 1.9 P25-54 rating, 2.7 W25-54 rating, and 3.0M P2+ viewers. The 90 Day franchise has expanded onto discovery+, the definitive non-fiction, real-life subscription streaming service. Current series include BARES ALL, THE SINGLE LIFE and LOVE GAMES.”

What do you think? Are you planning to watch the new season of 90 Day Fiance: Happily Ever After? when it arrives on TLC next month?

This series set out with good intentions I’m sure somewhere along the way the story lines ( which seem to be a year behind, after there aired) got ridiculous and far fetched. It seems ” reality stars or want to be ” are rearing their heads everywhere. Some of these couples
Are hard to watch. It appears TLC is all about ratings, not content.