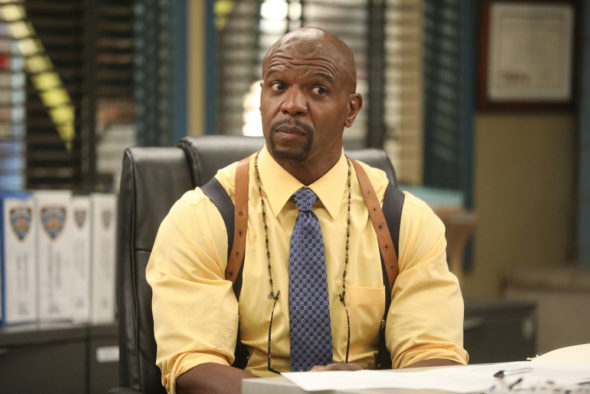 The beginning of the end is coming soon for Brooklyn Nine-Nine. One member of the cast – Terry Crews – has shared his thoughts on saying goodbye to the workplace comedy with Variety.

Crews said the following about ending the NBC comedy:

“It was so sad. I mean, you spend more time with these guys than you do your own family. It’s so much work but it’s so fun. We laugh all day.”

He also teased a bit about the final season:

“We had a lot of adjustments, a lot of somber talks. But when I look at the scripts and look at what we did, people will not be disappointed. I’ve been blessed to work with such amazing showrunners and writers and people who know how to entertain, but also inform. I’m working with these amazing actors and picking their brains, asking techniques, always trying to improve and get better.”

Would he ever return to his role as Lt. Terry Jeffords? Crews is on board for a reunion. He said:

“Everybody wants to bring it back… And I’m ready. I’m already pitching ideas. Hey, let’s do a Brooklyn Nine-Nine movie; we could do one every year!”

Brooklyn Nine-Nine is premiering its last season on August 12th on NBC.

What do you think? Are you sad that Brooklyn Nine-Nine is ending on NBC?

They need to have a nine episode season nine: 9 9

My son introduced me and his brother to 99 and we just loved it. We’ve been waiting for it to begin, again, and are so unhappy that yet another of the shows we are strongly invested in is going away. There are so few, anymore, that we completely enjoy and they seem to vanish without worthy replacements in our viewing.