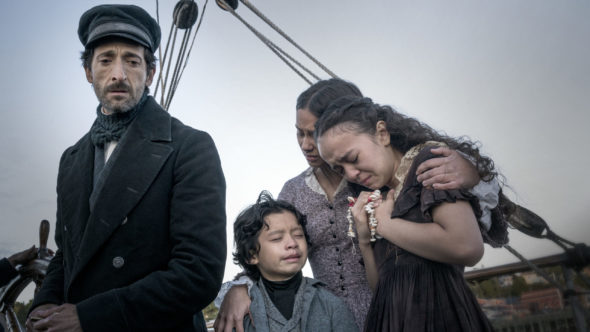 Chapelwaite is coming soon to EPIX. A premiere date for the series, which stars Adrien Brody and Emily Hampshire, has now been set. The series is based on Jerusalem’s Lot by Stephen King.

“Premium network EPIX announced today that Chapelwaite, based on the short story  Jerusalem’s Lot  by Stephen King and starring Academy Award® winner Adrien Brody and Emily Hampshire, will premiere on Sunday, August 22 at 10pm ET/PT. Set in the 1850s, the series follows Captain Charles Boone (Brody), who relocates his family of three children to his ancestral home in the small, seemingly sleepy town of Preacher’s Corners, Maine after his wife dies at sea. However, Charles will soon have to confront the secrets of his family’s sordid history, and fight to end the darkness that has plagued the Boones for generations.

Hampshire plays Rebecca Morgan, an ambitious young woman who left Preacher’s Corners to attend Mount Holyoke College, and has returned home with an advance to write a story for the new and prestigious Atlantic Magazine.  Her writer’s block lifts when Boone arrives in town with his children, and despite her mother’s protests, Rebecca applies to be governess of the infamous Chapelwaite manor and the Boone family in order to write about them. In doing so, Rebecca will not only craft the next great gothic novel, she’ll unravel a mystery that has plagued her own family for years.

Check out a trailer for Chapelwaite below.

What do you think? Are you planning to check out Chapelwaite on EPIX?

I loved this historical thriller. The writing is genius. The costumes and the sets are accurate and captivating. The casting is exceptionally well done. The kids are very authentic little actors. The girl from Schitts Creek pulls out an amazing performance and Adrian Brody transforms himself into a very believable character. This unexpected details and twists kept me on the edge of my seat. Two thumbs up. Thank you EPIX. I’m so glad I joined your channel. Finally some creative and entertaining programming.

I read and watch anything by Stephen King. I can’t wait to see Chapelwaite.

looking forward to this, thank you!