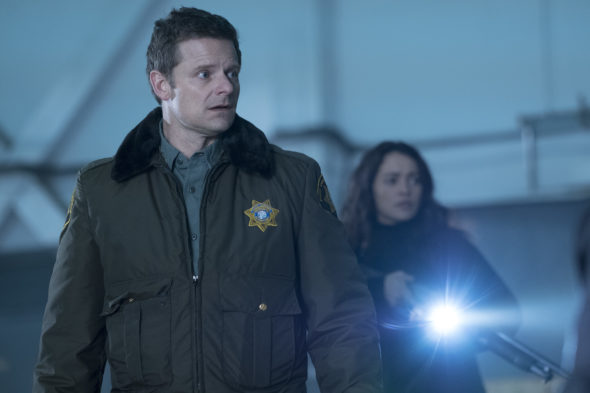 Have the refugees found a haven? Is The Crossing TV show cancelled or renewed for a second season on ABC? The television vulture is watching all the latest cancellation and renewal news, so this page is the place to track the status of The Crossing, season two. Bookmark it, or subscribe for the latest updates. Remember, the television vulture is watching your shows. Are you?

The first season of The Crossing averaged a 0.57 rating in the 18-49 demographic and 3.50 million viewers. Find out how The Crossing stacks up against other ABC TV shows.

Will ABC cancel or renew The Crossing for season two? The premiere’s ratings weren’t very good and the numbers quickly dropped lower. I don’t see this show being renewed.  I’ll keep an eye on the ratings and update this page with breaking developments. Subscribe for free alerts on The Crossing cancellation or renewal news.

What do you think? Were you hoping that The Crossing TV show would be renewed for a second season? Are you sorry that ABC cancelled this TV series, instead?

Absolutely WISH this show could be completed. It’s great, all around. It’s a shame it was canceled. Maybe Netflix or Disney or Apple could pick it up and finish it. So disappointing.

I am so saddened to hear this. This was by far the best tv series I’ve ever watched. Do us some justice ABC we want it back. Love all the way from Zimbabwe.

So saddened no 2nd series. Invested ourselves so much in 1st series during our 3rd lockdown UK
Do the right thing and get this back! Premise is so good
Please please please

The Crossing was a brilliant series,, I’m very sad you cancelled it. It always seems we get a great series every now and again, then it gets cancelled,without a good reason.

Now, you have cancelled Whiskey Cavalier, KEPT the awful Magnum remake and cancelled wonderful The Crossing and Take Two. I am still going down my list of shows and can’t wait to see what other stupid decisions you have made, ABC. I doubt I will watch ANYTHING you offer this fall because you seem to have absolutely no sense of what viewers want to watch. Good luck going down the TV tubes, ABC!

So sorry it got cancelled. One of the best I saw.

Great show, very disappointed not to find out what happened to the survivors!

I was disappointed The Crossing was not renewed for a second Season. It was well acted with an interesting story.

I so looked forward to this show each week. So disappointing . I was was just now checking for new season starting date when I found it was canceled.

Really upsetting to invest time in a series only to discover the 2nd series of The Crossing won’t shown.. why?? Great story line and different .. its got huge milage and followers who want more, bring us season 2 please..

I agree with you the problem with the show was it time slot. It was a great show I am so bummed it will not be back for season 2. I would take a nap in the afternoon when I got home so I could stay UP TO WATCH IT!!!!

Please continue the series. It was a nice break from reality. The Crossing is a very good storyline that could easily be carried forward.