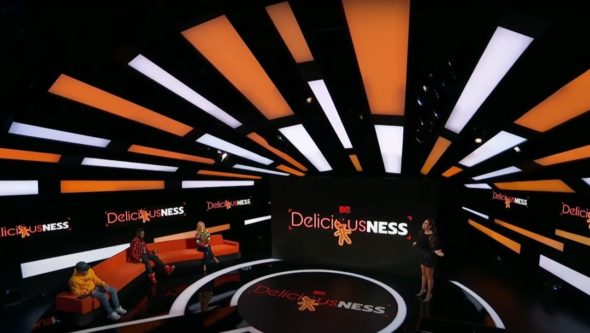 Get ready for more delicious blunders in the kitchen caught on tape. Deliciousness has been renewed for a second season by MTV, and Tiffani Thiessen is returning to host the new episodes. Fans will also see Angela Kinsey, Kel Mitchell, and Tim Chantarangsu as her foodie panelists.

The series is a spin-off of Ridiculousness, which returned with new episodes on Monday night. Season two of Deliciousness should not be far behind.

MTV revealed more about the renewal of the viral video series in a press release.

“On the heels of its successful launch, MTV today announced a season two pick up of Deliciousness, the food themed Ridiculousness spin-off.

The series will return with new episodes hosted by cookbook author of ‘Pull Up a Chair’ and host of Dinner at Tiffani’s, Tiffani Thiessen (Netflix’s Alexa & Katie, Beverly Hills 90210, Saved by the Bell). Also returning will be her panelist of famous foodies including Angela Kinsey (The Office), Kel Mitchell (All That, Kenan & Kel) and Tim Chantarangsu (Basic to Bougie).

From food blunders to restaurant fails to kids in the kitchen and more, Deliciousness celebrates our greatest indulgences – food and drink. Helping to satisfy the foodie in all of us, each episode will showcase the internet’s most viral and entertaining videos.

The debut of Deliciousness during its weeklong holiday-themed stunt in December out-performed in the ratings by double digits and saw a whopping 25% lift in its time slot versus the previous year’s average.

A premiere date for season two of Deliciousness will be announced soon and fans can catch up on past episodes available on MTV.com and the MTV App. All-new episodes of Ridiculousness premiere Monday, February 8 at 11pm ET/PT. Ridiculousness and Deliciousness are produced by Thrill One Media (formerly Superjacket Productions) and Gorilla Flicks.”

What do you think? Are you a fan of Deliciousness on MTV? Will you watch season two of the series?

The show sucks it’s not funny

I like the concept, Rob creating a new category of never ending television shows. I’m sorry to say though, but deliciousness just doesn’t make the cut, it’s horrible. I’ll give it one year w/ SGT – 8 months, and they’ll be done trying to interest the fine people of our country.