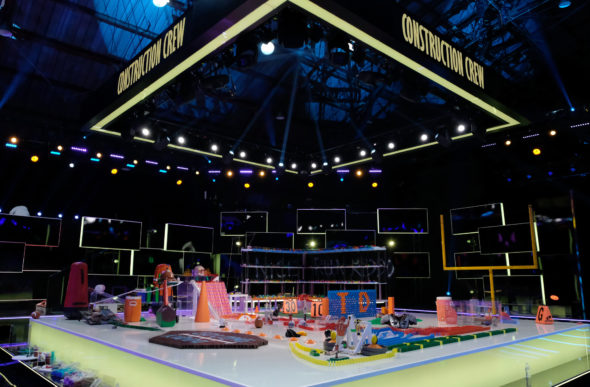 Is this new show a winner? Has the Domino Masters TV show been cancelled or renewed for a second season on FOX? The television vulture is watching all the latest cancellation and renewal news, so this page is the place to track the status of Domino Masters, season two. Bookmark it, or subscribe for the latest updates. Remember, the television vulture is watching your shows. Are you?

Airing on the FOX television network, the Domino Masters TV show is hosted by Eric Stonestreet with Steve Price, Danica McKellar, and Vernon Davis serving as judges. The series features teams of domino enthusiasts facing off in a domino toppling and chain reaction tournament. Sixteen skilled teams compete against each other in ambitious domino-building challenges with the goal of being crowned the country’s most talented domino topplers. In each episode, teams are given a bold theme and custom elements to incorporate into their Rube Goldberg-style topples. The pressure is on as one wrong move could set off a chain reaction that knocks them out of the running. Throughout the competition, the host and judges encourage the domino aficionados, introduce challenges and watch as the creations are put to the test during nail-biting topples narrated by Topple Announcer Joe Buck. The competing trios who most impress the judges will progress to the next round, until the finale, during which the top teams will face off for a cash prize, the ultimate trophy, and the grand title of Domino Masters.

The first season of Domino Masters averaged a 0.34 rating in the 18-49 demographic and 1.66 million viewers in the live+same day ratings (including DVR playback through 3:00 AM). While these numbers don’t include further delayed or streaming viewing, they are a very good indicator of how a show is performing, especially when compared to others on the same channel. There can be other economic factors involved in a show’s fate, but typically the higher-rated series are renewed and the lower-rated ones are cancelled. Find out how Domino Masters stacks up against other FOX TV shows.

Will FOX cancel or renew Domino Masters for season two? The show’s ratings could be a lot better especially when it doesn’t have an original episode of The Masked Singer as a lead-in. The show also doesn’t pick up much in delayed viewing. Still, it seems inexpensive to produce so, I think it has a decent chance of being renewed. I’ll update this page with breaking developments. Subscribe for free alerts on Domino Masters cancellation or renewal news.

What do you think? Do you hope that the Domino Masters TV show will be renewed for a second season? How would you feel if FOX cancelled this TV series, instead?