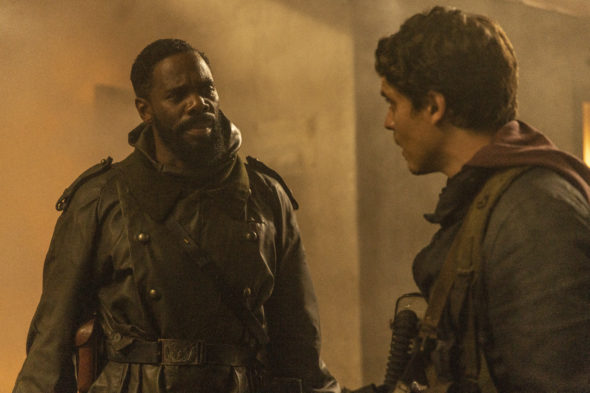 Morgan’s group will return and continue to fight for their survival on AMC. The cable channel has renewed Fear the Walking Dead for an eighth season.

The seventh season of Fear the Walking Dead averages a 0.19 rating in the 18-49 demographic and 914,000 viewers. Compared to season six, that’s down by 35% in the demo and down by 23% in viewership in the live+same day ratings (including DVR playback through 3:00 AM). While these numbers don’t include further delayed or streaming viewing, they are a very good indicator of how a show is performing, especially when compared to others on the same channel. There can be other economic factors involved in a show’s fate, but typically the higher-rated series are renewed and the lower-rated ones are cancelled. Despite the declines, Fear the Walking Dead remains one of AMC’s highest-rated shows.

The first half of the seventh season finished airing tonight and it’s been revealed that Kim Dickens is returning as a series regular. Dickens played Madison Clark in the first four seasons of the series. She will appear at some point in season seven and will be back as a regular in season eight.

What do you think? Do you watch the Fear the Walking Dead TV series on AMC? Are you glad to hear that the series has been renewed for season eight?

I like Fear the Walking Dead better than the original Walking Dead show. Love the Characters and stars of the show. Morgan is great and it was after he arrived that the show really took off. I started watching the original show with my daughter, but she’s graduated college and moved out on her own in 2015 and I’m still watching. Funny thing is, I probably wouldn’t have ever watched if she hadn’t wanted to watch the original show. I may be the oldest FWD fan.

As much as I like Morgan, this show is as dead as its Walkers, let it rest in peace.

Great news for the fans. The show has already jumped the shark, so those who still love it will want to watch. In a time where shows are cancelled left and right, people who like the show will be happy it is coming back. Kim Dickens coming back makes it jump the shark again, but The Walking Dead has jumped the shark a few times.