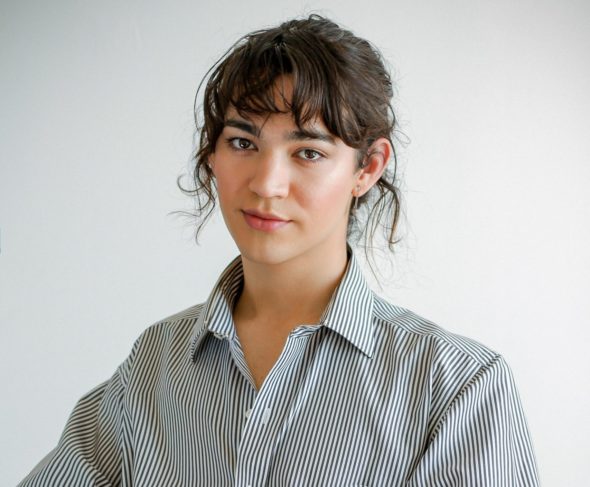 “Netflix today announced that Kim Cattrall [she/her] (Queer as Folk, How I Met Your Father) will join the cast of Glamorous as a series regular, playing makeup mogul Madolyn Addison, a veteran from the Golden Age of Supermodels who is the founder and CEO of the prestigious boutique beauty brand that bears her name. The quick-witted executive is focused on shaking up her business and sees an opportunity in Marco Mejia (Miss Benny), taking him from the makeup counter to a seat at the table, ruffling feathers along the way.

It was previously announced that Miss Benny [they/them] (Fuller House, Love, Victor and American Horror Stories) will play Marco Mejia, a young gender non-conforming queer man whose life seems to be stuck in place until he lands a job working for Madolyn. Also joining the cast in series regular and recurring guest roles will be:

· Zane Phillips [he/him] (Fire Island, Legacies) will play “Chad,” devoted son to Madolyn and the Director of Sales for her beauty empire, who is caught in a never-ending quest to live up to his mother’s expectations.

· Jade Payton [she/her] (Dynasty, Daybreak) will play “Venetia,” Madolyn’s ambitious and chic first assistant who takes the newly-hired Marco under her wing, showing him not only how to navigate the office, but queer Brooklyn nightlife as well.

· Michael Hsu Rosen [he/him] (Pretty Smart, Tiny Pretty Things) plays “Ben,” a graphic designer at Glamorous by Madolyn, full of angst and opinions, who has built a wall around his heart. That is, until he meets Marco, and is inspired to stumble out of his comfort zone.

· Ayesha Harris [she/her] (Daisy Jones and The Six, Tell It Like a Woman) plays “Britt,” a fellow graphic designer at Glamorous by Madolyn, who finds her long-time crush on her colleague requited when they match by surprise, sparking a relationship that gets serious in more ways than one.

· Diana Maria Riva [she/her] (Gordita Chronicles, Dead To Me) plays “Julia,” Marco’s unpretentious, no-nonsense mother who wishes her son would up his dreams of social media stardom and get a real job, which he finally does — much to her surprise — when he starts working for Madolyn.

· Lisa Gilroy [she/her] (Jury Duty, History of the World: Part II) plays “Alyssasays,” a first-generation social media influencer who pivoted to a career in marketing and now runs all social accounts at Glamorous by Madolyn, fiercely clinging to her former glory days.

Logline: Glamorous tells the story of Marco Mejia, a young gender non-conforming queer man whose life seems to be stuck in place until he lands a job working for legendary makeup mogul Madolyn Addison. It’s Marco’s first chance to figure out what he wants out of life, who he actually is, and what it really means for him to be queer.

A premiere date will be announced in the future.

What do you think? Do you plan to check out Glamorous on Netflix?

The woke brigade continues to thrive – back in the olden days things were simple, people were just people – they weren’t triggered by everything, everything didn’t need to be discussed forever, and gender, well you know, it is what it is… and before you woke people get all snakey at me, i’m gay, and I still maange to find all this PC stuff irritating as anything…. Do we need every story to have a tv program about it?