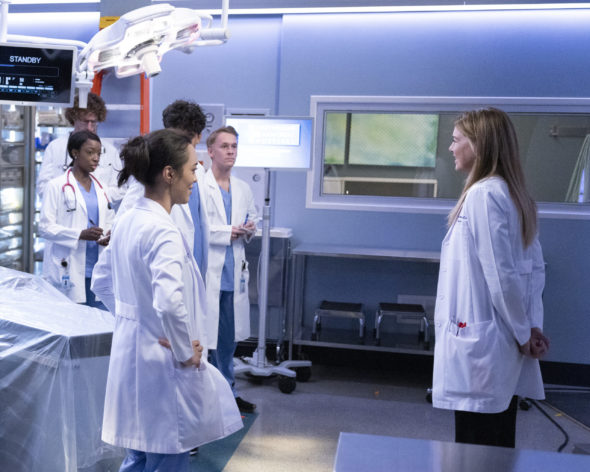 Grey’s Anatomy is returning to ABC for its 19th season tonight, and there are big changes coming to the long-running medical drama. Five new interns are arriving at Grey-Sloan Memorial Hospital with Ellen Pompeo set to appear in only eight episodes of the series this season. The new arrivals are played by Harry Shum Jr., Adelaide Kane, Alexis Floyd, Niko Terho, and Midori Francis.

With the limited on-screen involvement of Pompeo, some viewers have worried that this could mean the end of the ABC series. Simran Sethi, EVP, Programming and Content Strategy, ABC Entertainment, spoke about the show’s return and future, per Deadline:

“No decisions have been made at this time, but we hope to be in business with Shondaland for a really long time. And I think when you’re looking at this next season, I’m excited for this Thursday and for audiences to see this new class of interns, which does feel really reminiscent of nostalgic early Grey’s, but they’re absolutely their own characters.

This is a show that is in its 19th season. It was a long time ago that we saw that first class of interns and the world has changed, the culture has changed. And I think that Krista [Vernoff], Shonda [Rhimes] and the team at Grey’s Anatomy has done an incredible job at creating a new class of interns that speaks to 2022, but also have the same hallmarks of those early years, which is that camaraderie, the pace, the energy of all that stress that those interns have.”

Pompeo doesn’t think her decreased involvement means the series is ending anytime soon. She said the following about the future of Grey’s Anatomy:

“[Grey’s is] still gonna be just fine without me — I’m still gonna do the voice-over. And I’ll be back at Grey’s for the finale, and we’ll see if we can keep it going, I’m going to always be a part of that show – I’m an exec producer on that show, I’ve spent two decades of my career on that show, it’s my heart and soul, and I’ll never truly be gone as long as that show’s on the air.”

What do you think? Do you think it is time for Grey’s Anatomy to end? Or, do you want the series to continue for season 20 and beyond?

It’s as obvious as the flaming fires of Hell that the agenda here is to limp through the next two seasons, so they can get to a nice round number of 20 and then pull the plug. Problem with medical shows is that it’s hard to come up with unique medical situations year after year. Add to that the fact that you have all the other medical shows on other networks who have the same problem. Whatever the “case of the week” is on Greys, odds are you will see the same thing pop up on The Resident, Chicago Med,… Read more »

Ellen should just move on to other projects, its past time, since she has dialled in for a few seasons now… and it needs a refresh, a few of the old guard should go to be frank…. it needs to rediscover the elements that made it enjoyable in the beginning and that wasn’t the overly complex lives and bed jumping and so on, it was a compelling show about a hospital, not a show about a few of the people who spend some time in one. i imagine the new group will all be gender neurtal non-binary people with multi… Read more »

I like the new season so far. I won’t die without Meredith being on every episode. I can see how the show can continue indefinitely without her constantly onscreen.

Let’s see what the new season brings. I’ve been watching from the beginning. Hope this isn’t the last season.

Have loved this show from episode one. Will have to wait & see how the new young ones fit in with the old crowd. Some of the side story lines have gotten off track somewhat & it seems there are too many characters to keep up with. Along with will it get stale trying to amp up the drama with new people but essentially the same medical situations & crisis? I fear the end is getting closer every season. But kudos to 19 compelling seasons.