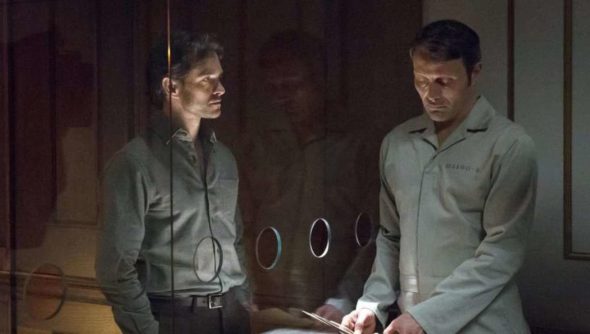 Hannibal fans have something special coming soon. The cast reunited on Zoom just as the drama arrived on Netflix, and the video for the event will be released next month.

According to Nerdist, fans can tune in for the reunion and will see questions answered by the cast and show creator of Hannibal during the event. Those taking part include Bryan Fuller, Mad Mikkelsen, Hugh Dancy, Gillian Anderson, Caroline Dhavernas, Katie Isabelle, Raúl Esparza, Hettiene Park, Kacey Rohl, Scott Thompson, and Aaron Abrams.

The Zoom chat will air on YouTube on July 11th. Episodes of the series now air on Netflix. The streaming service revealed that the series has landed in the top 10 several times since its arrival so, is there a possibility that the dark drama series could return. That possibility will be discussed during the stream.

What do you think? Do you plan to watch the Hannibal cast reunion? Would you like to see a fourth season?

I loved Hannibal. It was so disappointing to learn such a visually creative show was canceled. I really hope Netflix will continue to carry it’s torch. Mads Mikkelsen portrays the perfect Hannibal. I could definitely fall for that serial killer. LOL

Such a great show! I miss it terribly! A resurrection would be appreciated!!

One of the best tv series of the last decade and one of my favorite shows of all time.
Of course it would be amazing to see season 4 .

It was really finished at the end of season 3, please don’t bring that up.

#FannibalFamilyForever !!!! We are waiting for the new season please Mr. Fuller <3 <3