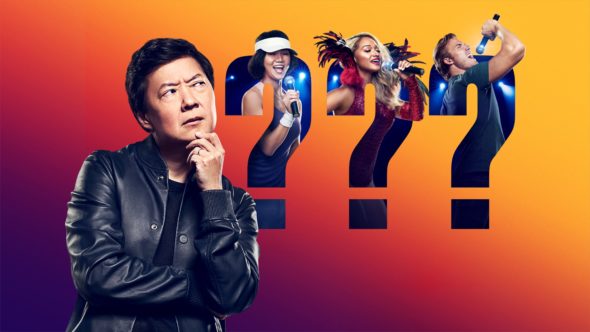 FOX has had great success with The Masked Singer TV series and now, the network has introduced another music competition with Jeong on board. Will lightning strike twice in the ratings and make I Can See Your Voice a hit? Will this Wednesday night series be cancelled or renewed for season two? Stay tuned.  *Status Update Below.

A music game show, the I Can See Your Voice TV series is hosted by Ken Jeong and also features Cheryl Hines and Adrienne Bailon-Houghton as regular panelists. All three join a rotating panel of celebrity detectives, comprised of comedians, pop culture experts, and a musical superstar. The panel tries to help a contestant tell the difference between good and bad singers, without ever hearing them sing a note. With $100,000 on the line, the contestant will attempt to weed out the bad “Secret Voices” from the good, based on a series of clues, interrogation, and lip-synch challenges.

12/10 update: You can see the latest night’s ratings in context.

What do you think? Do you like the I Can See Your Voice TV series on FOX? Should it be cancelled or renewed for a second season?

I love this show. I look forward to watching it every week. Please do not cancel it. We need more laughter and humor in these very dark and difficult times. If only for 30 minutes our minds are stress free. The show is fabulous, funny and totally different from anything that’s out there. PLEASE DO NOT CANCEL THIS SHOW.

Love, love, love the show… In this time we need more music and laughter…

Renew Please. I’m enjoying even more than the Masked Singer.

I hope they bring it back and give it a chance its knew at least for America..I started watching the Korean version..which is the original…and also I think that if the show just gets alittle revamp here and there you can.but all that said the show should be brought back.

I love this show. It brings my family together, and its fun.

Awesome show! I love I Can Hear Your Voice!!!

I am actually enjoying this more than The Masked Singer!