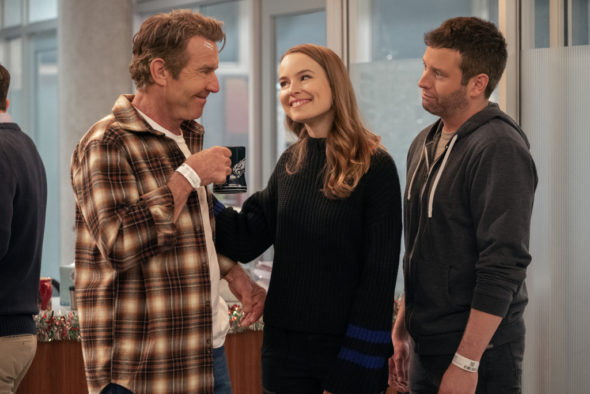 Are Emmy and Matt right for each other? Has the Merry Happy Whatever TV show been cancelled or renewed for a second season on Netflix? The television vulture is watching all the latest cancellation and renewal news, so this page is the place to track the status of Merry Happy Whatever, season two. Bookmark it, or subscribe for the latest updates. Remember, the television vulture is watching your shows. Are you?

Streaming on the Netflix subscription service, Merry Happy Whatever stars Dennis Quaid, Bridgit Mendler, Brent Morin, Ashley Tisdale, Siobhan Murphy, Adam Rose, Elizabeth Ho, and Hayes MacArthur, with Garcelle Beauvais, Mason Davis, and Lucas Jaye in recurring roles. The first season of this comedic anthology series takes place over 10 days surrounding the Christmas holiday. Don Quinn (Quaid) is the strong-willed patriarch of the Quinn clan and a sheriff in Bucks County, Pennsylvania. He tries to balance the demands of his job and complicated family with the stress of the Christmas season. His youngest daughter, Emmy (Mendler), comes home for the holidays with Matt (Morin), her new boyfriend who’s a struggling musician based in Los Angeles.

Unless they decide to publicize viewership, it is difficult to predict whether Netflix will cancel or renew Merry Happy Whatever for season two. Since Netflix isn’t ad-supported, it can take a chance on series it believes in. By all accounts, the series’ creator, Dennis Quaid, and others in the cast are prepared to make additional seasons that revolve around other holidays. Generally speaking, Netflix TV shows which are going to be renewed are usually picked up within a month or so of the series or season premiere. For now, I’ll keep my ears open and an eye out for news, and will update this page with breaking developments.

What do you think? Do you hope the Merry Happy Whatever TV show will be renewed for a second season? How would you feel if Netflix cancelled this TV series, instead?

Love this show! Had been looking for a Christmas based sitcom like this for YEARS like 30 years! It was like a miracle when it first came out, I’ve watched it probably 20 times in the past 2 years that it’s been out and am watching it again at this very moment! I NEVER thought there was a possibility of this being cancelled because I’m sure I’m not the only one whose been wanting a show like this. I will be absolutely appalled if this show does not get renewed

Loved this show last year! Rewatching it again and disappointed to not have Season 2 premiering this holiday season. Come on Netflix!!!!! Let them make Season 2!!!!! Such a great show with terrific actors!!!!

I really enjoyed the show, and the cast. I hope it comes back.

Loved the show. It was fresh and funny. Loved the cast.

I really hope this show comes back for season 2, I really don’t think we have good shows anymore and this one is great.

I truly hope they renew for season 2, great family show.

I want there to be a second season

A friend told me about this show & thought I would love it being an Eagles fan from Philadelphia, and she was right! The cast is perfect for each role and the story lines are interesting. I really hope there is a 2nd season; we don’t see too many family shows like we used too.

My husband and I really enjoyed the first season. Thought the acting and the writing were good. Would definitely watch it for more seasons. We are in our 70’s.